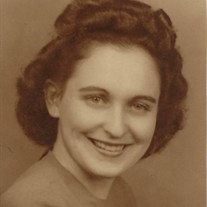 A. Eileen Kern passed away on Monday, August 24, 2020 at the Western Reserve Masonic Community in Medina, Ohio. Eileen was the daughter of Freda Fern Chase and Alfred M. Greenler. She was born on a farm in Pomeroy, Ohio in 1922. She was very ill during infancy, and always said her mother told her a concoction with mostly rice as the main ingredient basically kept her alive. The family eventually moved, and she and her brother, Al, were raised in Columbus, Ohio. There, in about the third grade, she met her future husband, John Kern. He always said he knew in grade school he was going to marry her! They did eventually marry on April 3rd, 1943, just before her new husband went off to fight in WWII. Eileen worked as a civilian in the Navy during the war using her secretarial skills. After the war she helped her husband with the language and writing requirements of his college curriculum. Then a son, Keith, was born in 1950, and a daughter, Karen, was born in 1954. Eileen was settled into the role of a homemaker. They raised their family in Westlake, Ohio. Her husband passed away last summer, they were married for 76 years. Eileen's interests were flower gardening, reading, cooking, sewing, cats, traveling, and at one point in her life, wallpapering. She also took astrology classes at another point in her life. Eileen was a long time member of the First Community Church, and a 70 plus year member of the Lorraine Chapter No.1, Order of the Eastern Star in Columbus, Ohio. Eileen was fond of the following Irish Blessing: "May the road rise to meet you, May the wind be always at your back, May the sun shine warm upon your face, and the rain fall soft upon your fields, and until we meet again, May God hold you in the hollow of His hand." Eileen is survived by a son, Keith, his wife Bonnie, a granddaughter, Jennifer, her husband Bobby, a great-grandson, Axel, a daughter, Karen, and her husband Rick. Mum/Grammy will be missed. Due to Covid-19, private services were held. Interment will be at Ohio Western Reserve National Cemetery, Seville. The Carlson Funeral & Cremation Services, 3477 Medina Road, Medina handled the arrangements. Donations may be made to the charity of your choice.

A. Eileen Kern passed away on Monday, August 24, 2020 at the Western Reserve Masonic Community in Medina, Ohio. Eileen was the daughter of Freda Fern Chase and Alfred M. Greenler. She was born on a farm in Pomeroy, Ohio in 1922. She was very... View Obituary & Service Information

The family of AGNES EILEEN KERN created this Life Tributes page to make it easy to share your memories.

Send flowers to the KERN family.