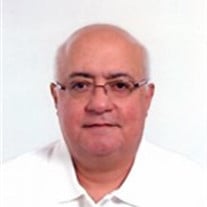 Ahmet Talug, age 70, of Medina, passed away on April 9, 2021. He was born on September 6, 1950, in Istanbul, Turkey, to the late Nizamettin and Lutfiye (Turkioglu) Talug. Ahmet came to the United States as an exchange student in 1968. He graduated from high school in Novato, California. He returned to Istanbul and graduated from Robert College with a Bachelor's in engineering in 1973. Ahmet moved back to the US and earned his Master's and Ph.D. in Composite Materials from Virginia Polytechnic Institute and State University. He married his high school sweetheart, Eser, on August 26, 1974. Ahmet continued his career as a professor at Northeastern University in Boston and later at General Electric as a product manager and investigator. He spent most of his career at Goodyear Tire and Rubber Company in Akron, Ohio as a research scientist. Ahmet was passionate about his work and enjoyed teaching and mentoring, especially during his time as a professor. Ahmet was a man with many interests who was always learning and seeking new adventures. When he was not working, he enjoyed traveling with his family, reading and photography. Ahmet loved to cook and bake and was regarded as the best bread baker by his granddaughters. In his prime, Ahmet enjoyed sailing in his free time; racing on the weekends and taking longer sailing trips with his wife and kids. He will be dearly missed by his beloved wife of 46 years, Dr. Eser Talug (Oktem); his children, Mine Pazitka (Jacob) and Can Talug (Rana); and his grandchildren, Becca and Gabby Pazitka and Gavin Taylor. Friends may join the family for a memorial visitation on Friday, April 16, 2021, from 5:00 p.m. to 7:00 p.m. at Carlson Funeral Homes & Cremation Services, 3477 Medina Road, Medina, OH 44256. Masks are required and social distance protocols will be followed.

Ahmet Talug, age 70, of Medina, passed away on April 9, 2021. He was born on September 6, 1950, in Istanbul, Turkey, to the late Nizamettin and Lutfiye (Turkioglu) Talug. Ahmet came to the United States as an exchange student in 1968. He graduated... View Obituary & Service Information

The family of AHMET TALUG created this Life Tributes page to make it easy to share your memories.

Send flowers to the TALUG family.