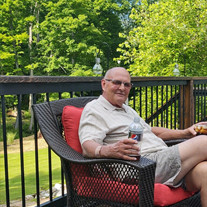 Albert "Al" C. Peters, 69, of Medina, passed away peacefully at home February 22, 2021. He was born October 18, 1951 to Mary (nee Glova) Peters of Medina and the late Albert E. Peters. A Harley Davidson enthusiast, Al and Elaine enjoyed many trips to Myrtle Beach, Daytona, and the Sturgis, South Dakota bike rallies. Two other memorable rides were to the Florida Keys, and a two-week ride through Nashville, New Orleans, San Antonio & Brownsville, and back north through Padre Island. He retired after 25 years from General Motors in Parma as a welder in 2010. Al and Elaine moved to South Carolina in 2012 and enjoyed traveling across country in their 5th wheel, fishing the local lakes with their boat, as well as time spent with their dogs and in their swimming pool. They moved back to Medina, Ohio in 2019 to be close to family while Al stubbornly fought cancer. Back in Ohio, Al continued to enjoy fishing on Lake Erie with his brother-in-law Rick Gifford, and sons, Kenneth, and Danial. He will by deeply missed by his beloved wife Elaine (nee Gifford) of 51 years. Al is also survived by his sons Kenneth A. (Melanie) Peters and Danial C. (Paula) Peters; grandchildren Nicholas, Alexandra, Danial, Manual, Isabell, and Magdelina; brothers Richard (Zoriana) Peters, Ronald (Eileen) Peters, and Robert (Sheila) Peters, as well as his many loving nieces and nephews. He was preceded in death by his father, as well as his two brothers, David and Barry. Friends and family hope while he is in heaven he is drinking his Bud Lite or sipping a Jim Beam and Coke, fishing on his boat or riding his Harley. A Celebration of Life will be planned for later this year. Care for Albert has been entrusted to Carlson Funeral Homes & Cremation Services, 3477 Medina Rd., Medina, Ohio 44256.

The family of ALBERT C. PETERS created this Life Tributes page to make it easy to share your memories.

Send flowers to the PETERS family.