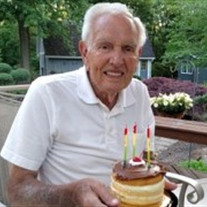 Alvin Robert Tasker, age 99 1/2, passed away December 16, 2020 at Akron General Medical Center from complications of COVID. Until his last days, Alvin lived independently at Copley Place in Copley, Ohio. Alvin and his twin brother Albert were born in Akron, Ohio on June 3, 1921 to the late Loretta (Kavanaugh) Tasker and Albert W. Tasker. He and his three brothers lived in Akron and worked summers on the family farm in Medina. He graduated from South High School in 1939 and enlisted in the U.S. Navy in April 1942. He served as an Electrician's Mate 1st Class on the U.S.S. Lloyd E. Acree destroyer escort in the Pacific throughout the war, and was honorably discharged in February 1946. Alvin was active in the annual reunions of the crew throughout the years, until their numbers dwindled. He was the last of two surviving crewmembers. After the war, Alvin returned to Akron where he married June B. Douglas, his sweetheart from high school. He is survived by three sons, Mark Tasker (Anna Gasbarro) of Boulder, CO, Craig Tasker (Valerie Tramonte) of Medina, and Thomas Tasker of Stow; three grandchildren, David Tasker of Flagstaff, AZ, Mara Steiner-Tasker (Michael) of Los Angeles, CA, and Kevin Tasker of Cleveland. Alvin worked, at various times in his life, as a master electrician, regional sales representative, restaurant owner, and at the time of his retirement, Vice President of Operations for Hillhaven Corporation. He was a long-time member of the First Evangelical United Brethren Church and IBEW Local 306 where he was a 65-year member. He deeply loved his family, particularly his grandchildren, building and fixing anything, golf, dancing, gin rummy, the Kentucky Derby, his many beloved pets, any social occasion, fast food and the open road. He is preceded in death by most of his friends and all of the family of his generation. Alvin's inurnment will take place at Mount Peace Cemetery on June 12, 2021, at 11:00 am, in Akron. Our family would like to express our sincere gratitude to the caregivers from HomeWatch, most notably his dear friend and companion Richard. Donations may be made to Paws & Prayers Pet Rescue, 1407 Main St., Cuyahoga Falls, Ohio, 44221. Services for Alvin have been entrusted to Carlson Funeral Homes & Cremation Services 3477 Medina Rd. (corner of Rt 18 & River Styx Rd.) Medina, OH.

The family of ALVIN R. TASKER created this Life Tributes page to make it easy to share your memories.

Send flowers to the Tasker family.