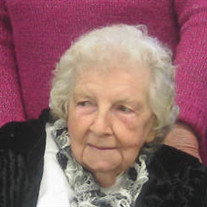 Barbara Grafton, 88, of Freedom Township, passed away Thursday, February 18, 2021. Born on the family farm in Freedom, Portage Co., OH,  daughter of the late D. Daniel and Mildred (Peppeard) Strawman and grandaughter of David S. and Beulah (Lamale) Strawman; and Neal and Laurel (Rathbun) Peppeard.   After 12 years of schooling in the Freedom School District, she went on to work at the A&P grocery chain as head cashier where she also met her future husband Daniel "Dan" Grafton.   Barb was an excellent seamstress starting at an early age sewing her own dresses throughout her school years and making and designing her wedding gown as well as the dresses of her attendants.  Years later when Dan became involved with the Freedom Hot Stove Baseball Team, Barb made all the players new uniforms.  Barb also helped to raise the money for the team, and when the team retired in the late 90's donated the remaining monies to Freedom Township to build the Pavillion that is located at Freedom Center. The members and visitors to the Portage Co. Randolph Fair knew Barb well for the numerous entries she contributed to the fair.  Her mentor and aunt, Margueritte Strawman had exhibits in the fair and was pleased to let her in on the fun.  The Record Courier often acknowledged Barb by printing several articles and pictures of her along , her blue ribbons and dozens of jars of home made jellies, jams, fruits, pickles, relishes, and more, all winning the awards.    Barbs hands were seldom idol, in the early 1970's she started a hobby making chocolate candy suckers for school children and baked and decorated birthday cakes, which led to her business 'Barb's Cakes and Candies'.  The store consisted of a variety of candy melts, molds, cake supplies and numerous instruction manuals, a small version of what many know as Michaels today.   She continued to make cakes as well, mainly wedding cakes, some four tier and consisting of a water fountain on the bottom with bridesmaids coming down the four flights of stairs.  She is survived by her husband of 66 years, Daniel  J. Grafton Deborah Kidd, Danny, Donald (Rose), and Dale (Luetta) Grafton; grandchildren Christopher, Aleah, Kaylee, and William; great  Aerreona; sister Patricia Mihailov; sister-in-law Karen Strawman. Barb is proceeded in death by her parents; her infant  daughter, Priscilla; brother David John Strawman; aunt Sarah Manges, uncle "Dick" Strawman; aunt Marie (Peppeard) Gordon. Please join Barb's family for a visitation on Thursday, February 25, 2021 from 12:00 PM to 1:00 PM, with a brief Memorial Service to honor Barb's life immediately following at Mallory-DeHaven-Carlson Funeral Home & Cremation Services 8382 Center St. Garrettsville, OH 44231. Burial will follow at Drakesburg Cemetery, Freedom, OH with Rev. Tracy Ogden Johnson of Ravenna First Church of the Nazarene officiating.  Facial coverings are required and social distancing guidelines will be observed. In lieu of flowers, memorials may be made to Ravenna First Church of the Nazarene and Bandage Rollers for World Missions, 3284 Brady Lake Rd., Ravenna OH 44266, in Barb's name.

The family of BARBARA ANN GRAFTON created this Life Tributes page to make it easy to share your memories.

Send flowers to the GRAFTON family.