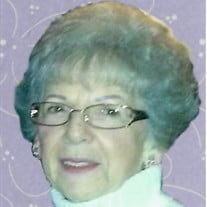 Carol G. Coughlin (nee Kilfoyle), 87, of Brunswick, passed away Friday, August 6, 2021. She was born December 21, 1933, in Cleveland to the late Joseph and Anna (nee Fitzgerald) Kilfoyle. Beloved wife of the late Patrick Coughlin Sr.; loving mother of Patrick (Beth) Coughlin Jr., Owen (Laureen) Coughlin Sr., Kimberly (Karl) Jendl, and Brian (Regina) Coughlin; loving grammy of Taryn (Kristopher) Skala, Patrick (Tara), Caitlin, Owen Jr. (Christin), Megan (Clay) Braham, Cara (Ryan) Capp, Keegan Coughlin, and Erin (Colin) Murphy; great-grandmother of Grayson Capp and Maeve and Tate Murphy; sister, Mary Catherine (Tom, dec.) Schmitz; aunt and great-aunt to many. In addition to her parents, she was proceeded in death by her siblings, Jean (Jack) Kirby, Marilyn (Bill) Wagner, William (Marci) Kilfoyle, Robert (Patricia) Kilfoyle. Carol was a founding member of Saint Ambrose Parish when it was established in 1957. She was a member of the Saint Ambrose Women's Guild and one of the Charter Members & a past officer of the Saint Ambrose Athletic Boosters Club. She was honored to have named the Saint Ambrose first CYO football team "The Scarlet Angels". Carol was the charter president of the Isabella Guild of The Knights of Columbus Council #4847 and was honored as the woman of the year for 1978 and 1979 by both the local council as well as the Ohio State council Knights of Columbus. She was active in politics in Brunswick in 1960 to 1980 along with her late husband Pat and was the president of the Brunswick Democratic Club and former precinct committee person. Carol served as tax administrator for the City of Brunswick and was a former member of (BYS) Brunswick Youth Sports. She was a long-time member of the Brunswick Eagles Aerie #3505. Carol loved to party, golf, and read but most of all she loved spending time with her children and grandchildren. Upon the death of her husband in 1986, she donated money in Pat's honor that was used to improve the Saint Ambrose athletic field and in lieu of flowers Carol requests donations to the Saint Ambrose Athletic Boosters Club 929 Pearl Road, Brunswick, Ohio 44212, https://stambrose.us and The Autism Society, 7650 Chippewa Rd, Cleveland, OH 44141, https://www.autism-society.org. The family will receive friends Thursday, August 12, 2021, from 5 to 8 pm in Carlson Funeral Homes and Cremation Services, 1642 Pearl Road (1/2 mile south of route 303), Brunswick. Carol's Mass of Christian Burial will be held in Saint Ambrose Parish on Friday, August 13, 2021, at 12 pm. Interment will follow at Eastlawn Memorial Gardens.

The family of CAROL G COUGHLIN created this Life Tributes page to make it easy to share your memories.

Send flowers to the Coughlin family.