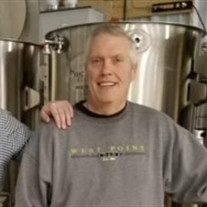 Craig W. Dean, 61, of Windham, went home to his Lord and Savior on Sunday, April 10, 2022. He was born July 7, 1960, in Cleveland, to the late Carole Dean. He graduated from Brunswick High School in 1978. Craig served 4 years in the U.S. Army as a Medic. He met the love of his life, Debbie, in 1986, and they married the same year. Craig worked at as network engineer and project manager for several companies, but his love was brewing beer. He was proud to open and operate Clubhouse Brewery in Warren with his family by his side; Craig was the Head Brewer, also known as "Pop." He was passionate about his work and helping his fellow veterans. Craig was proud of the sacrifice of those who served, especially his two sons who served in Afghanistan and Iraq. Craig will be deeply missed by his loving wife, Debbie, with whom was blessed to share 35 years of marriage; sons, Zach (Sabrina) Dean and Shayne (Molly) Dean; 6 grandchildren, with one on the way, and many, many of the dear friends he has made in his life. He was preceded in death by his mother and his precious granddaughter, Zoe. The family would like to invite friends to join them in honoring Craig's memory for a visitation on Thursday, April 14, 2022, from 2:00 P.M. - 5:00 P.M. at Mallory-DeHaven-Carlson Funeral Home & Cremation Services, 8382 Center St., Garrettsville, OH 44231. A funeral service will immediately follow at 5:00, with Pastor Chad Froelich officiating. Burial for Craig will be held on Monday, April 18, 2022, 1:00 P.M., at Ohio Western Reserve National Cemetery, 10175 Rawiga Rd, Seville, OH 44273. Please meet at Carlson Funeral Homes and Cremation Services, 3477 Medina Rd (Corner of Rt 18 & River Styx) Medina, OH 44256 NO LATER THAN 12:00 P.M. for procession to the cemetery.

The family of CRAIG W. DEAN created this Life Tributes page to make it easy to share your memories.

Send flowers to the Dean family.