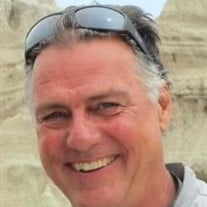 Danny Harrison never met a stranger; his charismatic charm and infectious smile were hallmarks of his beautiful, genuine character. Loved and respected within his community, Danny will be lovingly remembered and missed by many, especially his family and friends. Daniel S. Harrison of Hinckley, 62 years young, fought a courageous fight against COVID-19 before being welcomed into the loving arms of our Lord on Tuesday, January 19, 2021. He was born July 29, 1958 to James Harrison, deceased and Phyllis (nee Schanda) Harrison. He leaves behind his most cherished wife of 38 years and love of his life, Renee (nee Siarkowski). He also leaves behind two beautiful and loving children; son, Daniel J. Harrison and daughter, Whitney (Robby) Todd. His children and wife were the apple of his eye, and Dan relished every moment spent with them. In his community, Dan was the owner of Harrison Plaster & Drywall, Inc., a trade which he learned from his father. He spent years perfecting the trade, and eventually took ownership of the business with his wife at his side. A committed husband and loving father, he worked hard day in and day out to provide for his family. He would have given the shirt off his back to anyone who needed it, and enjoyed helping family and friends with projects in his spare time. He loved to ride his Harley and enjoyed several memorable cross-country trips with his son and close friends. He enjoyed cooking with his wife, listening to music, gardening and tinkering in his barn. Dan will be missed by so many, and his legacy will live on in the hearts of the many people whose lives he touched. He was a dear brother to Kathleen (Ted, deceased) Olson, Patricia (John) Harding, James S. (April) Harrison, Jr., Carol (Andy) Rusnacko, Scott Harrison and David (Lisa) Harrison. Dan was son-in-law to John and Karen Siarkowski, and Dan and Peggy Arden; brother-in-law to Frank Siarkowski, Sherry (Joel) Walsh, Nedra (Joe) Buchser and Danny Arden. Daniel was an uncle and great uncle to many, and was looking forward to welcoming his first grandchild in August 2021. Dan will be dearly missed by all those who loved him.As an expression of sympathy and in lieu of flowers, memorial contributions may be made in Dan’s name to the family. A celebration of life will be organized at a later date due to current COVID-19 restrictions on gatherings, and for the health and safety of our beloved family and friends. Carlson Funeral Homes & Cremation Services, 3477 Medina Road, Medina, Ohio were entrusted to handle the arrangements.

Danny Harrison never met a stranger; his charismatic charm and infectious smile were hallmarks of his beautiful, genuine character. Loved and respected within his community, Danny will be lovingly remembered and missed by many, especially his... View Obituary & Service Information

The family of DANIEL SCOTT HARRISON created this Life Tributes page to make it easy to share your memories.

Danny Harrison never met a stranger; his charismatic charm and...

Send flowers to the HARRISON family.