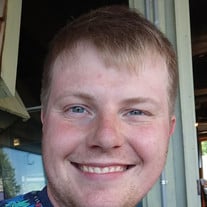 Daniel Robert Nelson, 27, of Cuyahoga Falls and Medina, Ohio, had a unique good nature that brought joy and laughter to all who knew him. "Dan" was known for his quick wit and humor. He passed into the arms of our heavenly Father Sept. 11, 2021, in New Tazewell, Tenn. Daniel was the beloved son of Robert William and Sally Jane Nelson, precious brother and best friend of Anne Elizabeth Nelson, and cherished life partner of 11 years to Alyssa Marie Schmitt. Born at the hour of his grandmother's funeral on Jan. 11, 1994, in Green Bay, Wisc., where he was also baptized, Daniel had a gift to let God's light illuminate from him. Shortly after his birth, he moved to Berea, Ohio, until 2001 when he moved to Medina, Ohio. He attended Medina City schools where he developed passions for science, math and leadership. He enthusiastically participated in cross county running, track, marching band and student council. He was a member of Junior Leadership Medina and studied in various STEM programs through NASA. He excelled in his studies leading him to attend post-secondary classes at The University of Akron. Dan graduated with honors from Medina City High School in 2012. He continued his education at The University of Akron, where he graduated with a Bachelor's of Science degree in chemical engineering in 2017. Building off of his early successes, Daniel began a chemical engineering co-op at Omnova Solutions in Mogadore, Ohio, where he later started his professional career after graduation. In 2020, he went on to become a safety engineer at BWX Technologies, Inc., in Barberton, Ohio, where he took immense pride in his commitment and ability to protect and keep others safe. He received his Catholic sacraments at St. Francis Xavier and attended Holy Martyrs Church. Daniel had an innate gift of bringing people together. He cherished the quality time he spent with others, which was evident in frequent gatherings with family and friends. An avid soccer player, bowler and board and card game enthusiast, Daniel had a friendly competitive spirit. He had a diverse appreciation for music favoring songs from the 70s and EDM. He was adventurous in nature, often planning hikes, camping trips and kayaking excursions. From an early age he excelled at skipping stones far across the water. He will forever be remembered for his warm, contagious bright smile. Daniel was the loving grandson to Clarence William and Judith Ann Nelson of Traverse City, Mich., and Edgar William and Fidelis Lucille LeBoeuf, both deceased, of Midland, Mich. He is survived by many loving aunts, uncles, cousins and countless treasured friends. Visitation will be at Carlson Funeral Homes & Cremation Services at 3477 Medina Rd., Medina, Ohio, on Monday September 20, 2021 from 2:00-4:00 PM and 6:00-8:00 PM. A Catholic funeral mass will be held at Holy Martyrs Church at 3100 Weymouth Rd., Medina, Ohio on Tuesday, September 21, 2021 at 10:00 AM followed by internment at St. Francis Xavier Catholic Cemetery. All are welcome. Masks are requested. In lieu of flowers, the family would gratefully accept donations to help fund Daniel's celebration of life please visit https://www.gofundme.com/dan-nelsons-celebration-of-life

Daniel Robert Nelson, 27, of Cuyahoga Falls and Medina, Ohio, had a unique good nature that brought joy and laughter to all who knew him. "Dan" was known for his quick wit and humor. He passed into the arms of our heavenly Father Sept. 11,... View Obituary & Service Information

The family of DANIEL NELSON created this Life Tributes page to make it easy to share your memories.

Send flowers to the Nelson family.