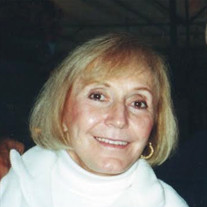 Delcia Delphine Dluzynski, aged 79 of Westfield Township, passed away peacefully at home, surrounded by her family on Tuesday, June 2, 2020. Delcia was born in Cleveland, Ohio on December 19, 1941 to Steve and Adele (nee Dunikowski) Gorzelanczyk. Delcia enjoyed a family history rich in ethnicity, stemming from upbringings near the Slavic Village neighborhood of East Cleveland, and Delcia's parents owning The Polish Village Tavern for 43 years. Delcia graduated from Saint Stanislaus High School in 1958, she obtained her nursing degree from The Saint Alexis School of nursing in 1962, and then married her high school sweetheart David, in 1964. Delcia served over 50 years in the nursing industry and retired from the Medina County Health Department after a 23-year career in helping provide home health care to the county’s residents. Delcia and David moved to Medina in 1974 and had been residents for the remainder of their lives. Delcia thoroughly enjoyed shopping and was a lifelong Cleveland and OSU sports fan. She enjoyed traveling, attending mass and visiting with friends and family with her husband, especially the road trip with the dogs to their winter home in The Villages, Florida. Delcia's favorite past-time was watching and participating with her children and grandchildren in their sporting events and other interests. Delcia's strength, and a strong devotion to faith, have helped her family and friends through the difficult times of caring for previously lost family members throughout her life, and still continues. She has left a special place in the hearts of those who had met her. Delcia is survived by her son, David (Allison)Dluzynski; grandchildren, Zia, Caleb, Lily; and son-in-law, Malcolm Quinn. She was preceded in death by her parents, her husband and her daughter, Laura Quinn. Delcia’s care has been entrusted to Carlson Funeral Homes & Cremation Services, 3477 Medina Road, Medina, OH 44256. Friends may join for a Funeral Mass that will be held on Saturday, June 13, 2020 at 11:00 AM at Our Lady Help of Christians Catholic Church, 60 High Street, Seville, Ohio 44273. Inurnment will be held at a later date. In lieu of flowers donations may be made in memory of Delcia to the GIST Cancer Research Fund at www.gistinfo.org, or Retinitis Pigmentosa - The Research to Prevent Blindness at www.rpbusa.org.

The family of DELCIA D DLUZYNSKI created this Life Tributes page to make it easy to share your memories.

Send flowers to the DLUZYNSKI family.