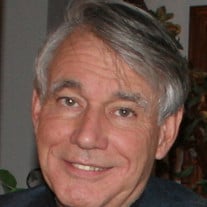 Dennis Louis Switalski, age 75, passed away on Saturday, October 9, 2021, in Olmsted Falls, Ohio, after a long illness. Dennis is survived by his devoted wife, Cheryl Lynn (nee Buehler), of 30 years; their son, Aaron Dennis; his children, Brian Dennis (Rebecca) and Alison Marie Hobbs (Peter), whom he shared with his former spouse, Camille Fuehrer; his stepsons, Jason Franklin Rader (Karen) and Jerad Allen Rader (Toni); 9 grandchildren; sisters Patricia Podwojski (David), Christine Arnold (Harry), Donna Domitrovich (Karol), and Arlene Yax (Michael). He is preceded in death by his parents, Louis and Clara Switalski. Dennis was born in Cleveland, Ohio on October 14, 1945. A lifelong resident of Ohio, he graduated from Independence High School, then earned degrees in finance and business administration from Case Western Reserve University and Cleveland State University, respectively, and was licensed as a Certified Public Account. His career path led him through the banking, foundry, and oil industries, with the majority of those years spent serving as Chief Financial Officer of Wallover Oil Company in Strongsville, from where he retired in 2015. Dennis served in the United States Army during the Vietnam War, where he was stationed in South Korea. He was a member of St. Ambrose Catholic Parish in Brunswick. Dennis was a quiet, reserved man, with a dry wit and veiled sense of humor. He enjoyed his work almost as much as he enjoyed football. He also had a passion for classic Ford Mustangs, owned a 1968 model, and belonged to the Northeastern Ohio Mustang Club for many years. Visitation will be at Carlson Funeral Homes and Cremation Services, 1642 Pearl Road, (1/2 mile south of Route 303) Brunswick, Ohio, on Monday, October 18 from 2:00 - 4:00 pm and 6:00 - 8:00 pm. A funeral service will follow on Tuesday, October 19 at 10:30 am at the funeral home. Burial will take place following the service at Resurrection Cemetery in Valley City. The family suggests donations may be made in Dennis' name to The Renaissance Health Center, 26376 John Road, Olmsted Twp., Ohio 44138, or the Lewy Body Dementia Association, online at https://www.lbda.org/donate/ or 912 Killian Hill Road S.W., Lilburn, GA 30047.

The family of DENNIS LOUIS SWITALSKI created this Life Tributes page to make it easy to share your memories.

Send flowers to the Switalski family.