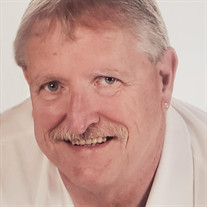 Donald G. Prall, 71, of Hiram, was called home to his Lord and Savior Tuesday, December 28, 2021. He was born July 6, 1950, in Willoughby, to the late Wilbur "Buck" and Frances Prall. Donny worked at Hiram College as a plumber for 30+ years retiring, in 2012. After retirement, he became an avid beekeeper taking enormous pleasure in giving away the fruits (honey) of his labor. Donny was always the entertainer and was an amateur magician along with being a gifted joke teller - not letting time or place stop him from sharing his jokes even if he had told them 100 times before. He was an active member of Saint Ambrose Church lending his talents to Pastoral Council, Finance Committee, Eucharistic Ministry, Youth Ministry, Altar Server, Chair of the annual Chicken Dinner Festival, co-chair of bingo, planning the church Fiftieth Anniversary celebration, and so much more, too long to list. If there was a need, Don shared his gift and talent. Donny was also a visionary and was an integral part in bringing the Knights of Columbus culture of faith to St. Ambrose by helping establish a council and subsequently fostering the council by becoming the first Grand Knight. He continued his commitment to the Knights by becoming very active locally, and at both district and statewide levels. He served in the Knights as District Deputy, Faithful Navigator, District Deputy Coordinator and held the state of Ohio office of Church Director. He found much pleasure and felt it continually strengthened his faith by participating in Coats for Kids, First Call for Help, Catholic Charities, feeding the homeless at the City Mission, and so many more charitable works. Donny felt most blessed and truly felt God's presence especially since he celebrated 40 years of sobriety on July 9, 2021. He thanked God daily for that gift and shared his joy by participating in jail ministry. Donny most enjoyed spending time with his grandchildren but also found pleasure in cruising, visiting casinos, hanging with "Sissie", and always stayed side by side with his soulmate, Maria. Donny will be deeply missed by his wife, Maria, with whom he was blessed to share 48 years of marriage; children Christin (Shawn) Woolf and Christopher Schmidt; his grandchildren Shawn Christopher and Abigail were the love of his life; he adored his "Sissie" Emma (Nolan) Hitchcox and leaves another sister Diane (Chuck) Habyl. He was loved and will be deeply missed by close friends and family including many nephews and nieces. He was preceded in death by his parents, brother, Robert, and his nephews, Frankie, Tony, and Robbie. A Visitation to honor Don's memory will be held Friday, December 31, 2021, from 10:00 A.M. - 12:00 P.M. at St. Ambrose Roman Catholic Church, 10692 Freedom St, Garrettsville, OH 44231. A Mass of Christian Burial will immediately follow at 12:00 P.M. at the church. All services were entrusted to Mallory-DeHaven-Carlson Funeral Home & Cremation Services, 8382 Center St., Garrettsville, OH, 44231.

Donald G. Prall, 71, of Hiram, was called home to his Lord and Savior Tuesday, December 28, 2021. He was born July 6, 1950, in Willoughby, to the late Wilbur "Buck" and Frances Prall. Donny worked at Hiram College as a plumber for 30+ years... View Obituary & Service Information

The family of DONALD G. PRALL created this Life Tributes page to make it easy to share your memories.

Send flowers to the Prall family.