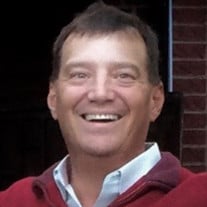 Edward (Ted) John Karman, age 54, of Medina, passed away surrounded by his wife Ellen and daughters Kallie and Kara on March 24, 2020. He was born on November 10, 1965, in Lakewood, Ohio, to the late James and Carolyn (née Hoehn) Karman. Ted graduated from The Leelanau School in Glen Arbor, Michigan, and then the University of New Hampshire, where he met Ellen, his wife of thirty years. Ted was a member of Sigma Alpha Epsilon and the UNH ski club and enjoyed skiing many of New England’s peaks, as well as those in New Mexico, California and the Alps. After graduation in 1988, Ted joined Talsol-Marhyde of Cincinnati as National Sales Manager. Ted and Ellen married and moved to Mariemont, Ohio, where they welcomed both of their daughters into this world. In 1996, Ted became Vice President of Mohawk Finishes in Amsterdam, New York, where he and his family bought a 226-year-old home and enjoyed living there for seven years. Ted thoroughly loved the Adirondacks, where he cross-country skied, watched the girls horseback riding and spent summers on Sacandaga Lake. In 2003, Ted and his family moved back to Northeast Ohio, where he became owner and partner in Daniels’s Amish Collection, a nationwide manufacturer of bedroom and dining furniture. In Medina, Ted and Ellen ran Red Coach Alpaca Farm, a breeding and boarding alpaca farm, and a horse farm for many years. The past ten years Ted enjoyed retirement, spending time with his family and friends. Ted enjoyed watching his daughters grow up and achieve all of their dreams, walks on the beach with his wife, and, although he was a scratch golfer, playing “adventure” golf with his buddies was special. He was a friend to all and a father to many, always providing a safe place and a word of positive advice. Ted’s boisterous laugh and positive attitude could fill any room and will be greatly missed. Ted will be dearly missed by his loving wife Ellen (née Cumming); children Kallie and Kara; siblings Robb Karman (Tracy) of Pacific Grove, California, Janet Karman Cook (Craig) of Rocky River, Ohio, and Christopher Karman (Nancy) of Hudson, Ohio; and his many nieces and nephews. As Ted would say, “It was a pleasure and a privilege - and now - onward and upward.” Private cremation arrangements have been entrusted to Carlson Funeral Homes & Cremation Services, 3477 Medina Road, Medina, Ohio 44256. A Celebration of Ted’s Life will be held at a later date. In lieu of flowers, donations may be made in Ted’s name to: Boys & Girls Clubs of Northeast Ohio, PO Box 72090 OPC833, 295 Huntington Circle, Akron, Ohio 44307 or online www.bgcneo.org

Edward (Ted) John Karman, age 54, of Medina, passed away surrounded by his wife Ellen and daughters Kallie and Kara on March 24, 2020. He was born on November 10, 1965, in Lakewood, Ohio, to the late James and Carolyn (née Hoehn) Karman. Ted... View Obituary & Service Information

The family of EDWARD JOHN KARMAN created this Life Tributes page to make it easy to share your memories.

Send flowers to the KARMAN family.