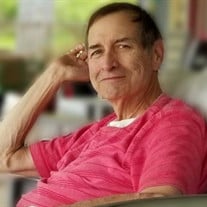 Edward Allen (Eddie) Vanhorn, 65, of Garrettsville, passed away unexpectedly on Saturday, January 8, 2022, with his devoted wife at his side. He was born February 17, 1956, in Ravenna, to the late Edsel and Wilda (nee Cress) Vanhorn. He remained a lifelong resident of Garrettsville. Eddie graduated from James A. Garfield High School in 1974, where he was a member of The National Honor Society. Eddie completed many college courses at Kent State University, obtaining an associate's degree in general studies. He had a substantial desire to learn and would have taken limitless college classes just for the sake of learning. On August 25, 1979, Eddie married his best friend and only love, Donella Woofter. He was a member and former Elder of the Streetsboro Church of Christ, and he had a profound love for God and the Church. Eddie was a hard worker at everything he did; he often worked two jobs to provide for his family. Eddie worked at Harshaw for 20 years until the plant closed. He retired from Allstate Insurance where he worked as a claims adjuster. Eddie enjoyed gardening, collecting stamps, playing cards, traveling, camping, giving his grandchildren tractor rides, and spending Sunday afternoons with family. He had a love for music and an uncanny ability to make a song up at any given instant. He was the best husband, father, and grandfather that anyone could have asked for. Eddie was truly blessed in his life, just not with good health. He suffered through many health issues but always remained positive with a smile on his face. Eddie will be deeply missed by his loving wife Donella, with whom he was blessed to share 42 years of marriage; daughters, Jennifer (Shawn) Haylett and Tara (Jeff) Illinik; grandchildren, Scott Jr., Angela, Kaylynn, Spencer, Kaytlin, Jewels, Charlotte, and Nathan, and his brothers, Kenneth (Robin) Vanhorn, and Michael (Amy) Vanhorn. He was preceded in death by his son, Scott Vanhorn; sisters Lydia Vanhorn and Brenda Hone, and nephew, Johnathan Vanhorn. Please join the family for a visitation to honor Eddie on Thursday, January 13, 2022, from 5:00 PM until 7:00 PM at Mallory-DeHaven-Carlson Funeral Home & Cremation Services 8382 Center St. Garrettsville, Ohio 44231. A funeral service will be held on Friday, January 14, 2022, at 11:00 AM, also at the funeral home, with Minister Ralph Price officiating. Burial will follow at Park Cemetery where he will be laid to rest next to his son.

Edward Allen (Eddie) Vanhorn, 65, of Garrettsville, passed away unexpectedly on Saturday, January 8, 2022, with his devoted wife at his side. He was born February 17, 1956, in Ravenna, to the late Edsel and Wilda (nee Cress) Vanhorn. He... View Obituary & Service Information

The family of EDWARD ALLEN VANHORN created this Life Tributes page to make it easy to share your memories.

Send flowers to the Vanhorn family.