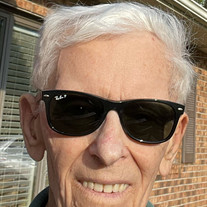 Ernest Louis Borsich passed away on March 9, 2022 at Plum Creek Assisted Living in Brunswick, Ohio. He was born September 4, 1927 in Lorain, Ohio to the late John and Elizabeth Borsich. He grew up in Lorain with his twin brother, Otto, and younger brother, Robert. Ernie enlisted in the Army when he was 18 and served in Germany. After his service in the Army, he worked for Columbia Gas Transmission Systems for 40 years prior to his retirement. He was married to the late Elizabeth Borsich for 69 years and together they had six children. Ernie is survived by his six children; son James Allen (Malaea) of Lyman, SC; daughter Jeri Anne Mead (Robert) of Columbia, SC; daughter Carolyn Louise Henniger (Craig) of Wadsworth, OH; daughter Kathryn Elizabeth Borsich of Florence, AZ; son Ernest John (Kara) of Valley City, OH; and daughter Peggy Lynn Pierpoint of Seville, OH. He also leaves behind eight grandchildren; Rachel Borsich; Andrew, Elizabeth, David, Keath and Matthew Mead; Randy and Melonie Pierpoint. Preceding him in death were his wife Elizabeth, brother Otto and son-in-law Robert Mead. His children have many fond childhood memories of their dad. He coached their Little League teams, was a helper extraordinaire with science projects, patiently taught them how to drive, always remembered to give his daughters small heart-shaped boxes of chocolates on Valentine's Day (his wife got the big box!), never complained when they wanted to hang out with him in his garage workshop and 'help' with his projects, and spent years getting up before 6:00a.m. on Sunday mornings to help them deliver their Akron Beacon Journal paper routes. Ernie was quite the handyman and woodworker, having completely rebuilt and modernized the 1920's house the family moved into in 1962. He was especially gifted at and enjoyed building furniture. His pleasant demeanor and quirky sense of humor will be missed by all. The family will have a private memorial service for him and he will be inurned at Western Reserve National Cemetery. Arrangements have been entrusted to Carlson Funeral Homes and Cremation Services 3477 Medina Rd, Medina, Ohio, 44256.

Ernest Louis Borsich passed away on March 9, 2022 at Plum Creek Assisted Living in Brunswick, Ohio. He was born September 4, 1927 in Lorain, Ohio to the late John and Elizabeth Borsich. He grew up in Lorain with his twin brother, Otto, and younger... View Obituary & Service Information

The family of ERNEST BORSICH created this Life Tributes page to make it easy to share your memories.

Send flowers to the Borsich family.