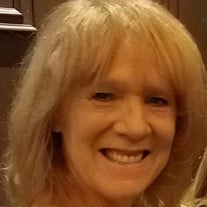 Geri Lombardo (nee Graham), age 68, of Medina, passed away surrounded with the love from her family after fighting a courageous battle with leukemia on April 18, 2022. She was born on September 11, 1953, in Cleveland, Ohio to the late Earl and Frances (nee Hayes) Graham. Geri graduated from Parma High School in 1971. She married the love of her life, Richard Lombardo, on August 19, 1989. They were inseparable from the day they met until she took her last breath. She cherished her children immensely and they were the light of her life. She loved to spend time with her entire family. She always greeted people with her big, beautiful smile and a warm hug. If you were lucky enough to know her, you know what a caring, kind, selfless, giving person she was. Geri was a huge animal lover and owned many four foot animals throughout her life. At a young age, she discovered a passion for ice skating by taking lessons and becoming a professional, which eventually lead to her becoming an ice skating instructor. She loved dancing, shopping, turning her house into a Christmas wonderland each year and tending to her yard and garden. She will be missed dearly by her loving husband of 33 years; children: Teri (Nathaniel) Donelson, Kimmy (Nate) Tobias, Anthony Lombardo , Daniel Lombardo, Jodi Lombardo , Chris (Jenny) Lombardo , Scott (Shannon) Lombardo, Rick (Megan) Lombardo; grandchildren: Keagan, Sloane, Anthony, Aaden, Courtney, Luke, Lacy, Lainy, and Angelina; great-grandchild: Carter; siblings: Diane Graham, Scott (Tracy) Graham, Cheryl (Flory) Del Sangro, sister in law Dee Graham, and many nieces, nephews, and friends. Geri was preceded in death by her parents and brother, Earl Graham. Friends may join the family for visitation for Geri on Wednesday, April 27, 2022 from 2-4 pm and 6-8 pm at Carlson Funeral Homes and Cremation Services, 3477 Medina Rd (Corner of Rt. 18 and River Styx), in Medina, Ohio. Funeral Service will be held on Thursday, April 28, 2022, 10 am at Holy Martyrs Catholic Church, 3100 Old Weymouth Rd in Medina. Interment will follow at Holy Cross Cemetery at 14609 Brookpark Rd, in Brookpark, Ohio. In lieu of flowers, please consider making a donation in memory of Geri to the Medina County SPCA. www.medinacountyspca.com

Geri Lombardo (nee Graham), age 68, of Medina, passed away surrounded with the love from her family after fighting a courageous battle with leukemia on April 18, 2022. She was born on September 11, 1953, in Cleveland, Ohio to the late Earl and... View Obituary & Service Information

The family of GERI LOMBARDO created this Life Tributes page to make it easy to share your memories.

Send flowers to the Lombardo family.