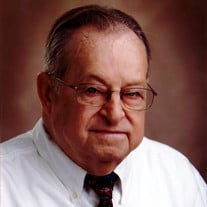 Harry G. Kraft, Jr., 87, of Freedom Township, passed away very peacefully, surrounded by his loving family on Friday, October 8, 2021. He was born March 1, 1934 in Spokane, OH, to the late Harry and Alta (nee Bailey) Kraft, Sr. Harry was a graduate of Williamsfield High School, where he was the president of his senior class. He participated in baseball, basketball and track; along with chorus and school plays. He was proud to have served his country in the United States Army during the Korean War. After leaving the Army in 1955, he worked and lived in Ashtabula, Ohio for a year while saving money for college. In 1956 he married his longtime sweetheart Joanne Childs, and they moved to Hiram, Ohio where he entered college using the G.I. Bill. While at Hiram College he loved being part of the Terriers basketball and baseball teams. He was awarded Most Valuable Athlete his senior year. Harry loved sports and loved coaching. He coached for Streetsboro, James A. Garfield, Windham, and Mathews high and middle schools. Harry will be deeply missed by his loving wife Joanne, with whom he was blessed to be married to for 65 years; children, Kenneth (Doreen), Darryl (Hui) and Carrie (Mike Pesicek) Kraft; grandchildren, Bane (Traci), Raeanne, Dustin (Ashley), and Darren Kraft, Nathan (Lakin) Molnar and Matthew (Sammy Miralia) Molnar; great grandchildren, Landon, Alaina, Vance, Brenna, Allison, Ian, Mercedes, Brandon, Ainsley, Adam, Kannon, and Vada; and one great-great grandson, Isaiah; siblings Monte Kraft and Nancy Goodenow, and many nephews, nieces, and friends. He is preceded in death by his parents; siblings, Charles, Sherman, Cecil, Mabel and Linda. Per Harry's wishes, cremation has taken place. A Memorial Service for Harry will be held on Thursday, October 14, 2021 from 5:00 PM to 7:00 PM with a Memorial Service with Rev. Dr. Richard Thewlis officiating, immediately following at Mallory-DeHaven-Carlson Funeral Home & Cremation Services, 8382 Center St., Garrettsville, OH, 44231.

The family of HARRY G. KRAFT created this Life Tributes page to make it easy to share your memories.

Send flowers to the Kraft family.