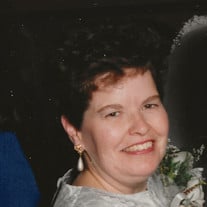 On March 24, 2022 we all lost Iris Louise (nee Wells) Stacey. She was one of the world's most loving, funny, caring and all around beautiful, women. Iris was born to Charlie and Iris Wells on December 10, 1944 in Akron, Ohio. She spent her youth in Akron and Cuyahoga Falls. She was a graduate of Cuyahoga Falls High School in 1962. After graduation she immediately went to work for Goodyear as a secretary. Her first child, a boy, was born in January 1965. In 1972 she and her then husband adopted another boy. She had one last adoption, this time a girl, in 1974. At the end of the 70's the family moved to Covina, California. During this time, she showed her true strength by supporting the family after her first husband suffered a brain injury in a racing accident. Her life took an awesome turn for the better when she met Daniel Stacey in early 1986. By October of that year, the two were wed. She had truly found her best friend. The following excerpt was found in Iris's notes. No better description than her own words could be crafted: "On March 22, 1986, while at my favorite dancing spot, Daniel Stacey, the man of my dreams, asked me to dance. The electricity between us was incredible! Within six months, we were Mr. and Mrs. Stacey. Our relationship is so special as we are total complements to each other, sharing life to the full, filling each other's needs and those of our families. He adores me, and I am crazy about him." This marriage brought another two boys under her parenting and guidance. As time progressed, Daniel and Iris' love and affection for each other only grew stronger. They became the true definition of soul mates. The two were there for each other through difficult times. They stuck together through sickness and health. Poor times and richer. Until they were parted by death. For the remainder of her time in Covina she worked as an Executive Secretary. She brought her old school, "can do and make it happen" attitude, and mentored numerous younger women in the secretarial arts. Iris developed a strong bond with numerous co-workers, friends and family members. She never forgot, and frequently talked with and visited, the four women who grew to become her loving friends. In 2002 Iris and Daniel relocated to Medina, Ohio, where she crafted her first of over 150 quilts. Those given to her friends were designed specifically with them in mind. Other times she donated quilts to help raise funds for special causes. If you have one of her quilts, consider yourself lucky and special. Iris's family has been overwhelmed by the love and support of her friends who are far too numerous to mention individually. While she battled the insidious disease, Alzheimer's, her friends continued to assist her with quilting. They brought food to ensure Daniel ate while he took care of Iris. They returned all the love and caring Iris gave to them tenfold. Words cannot accurately convey the appreciation that Daniel and Iris' family feels for her friends. They all helped make her struggle that much more bearable for her family, but more importantly allowed Iris to keep doing the things she loved to do until the very end. Services will remain private. Care of Iris has been entrusted to Carlson Funeral Homes and Cremation Services, 3477 Medina Rd, Medina, Ohio.

On March 24, 2022 we all lost Iris Louise (nee Wells) Stacey. She was one of the world's most loving, funny, caring and all around beautiful, women. Iris was born to Charlie and Iris Wells on December 10, 1944 in Akron, Ohio. She spent her... View Obituary & Service Information

The family of IRIS L. STACEY created this Life Tributes page to make it easy to share your memories.

Customized sympathy cards. Mailed for you.