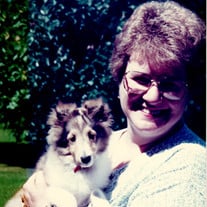 Joanne Marie (Seiberling) Knudsen, age 77, passed away unexpectedly on May 11, 2020. She was born July 31, 1942 in Wadsworth, Ohio. Joanne was the daughter of the late Francis and Julia (Lehman) Seiberling, and the stepdaughter of the late Laura... View Obituary & Service Information

The family of JOANNE KNUDSEN created this Life Tributes page to make it easy to share your memories.

Send flowers to the KNUDSEN family.