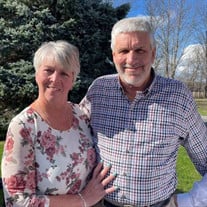 Joseph “Joe” Olson, 62, and Christie Ann “Chris” Olson, 60, of Windham, passed away on Monday, May 30, 2022. Joe was born in Warren on April 7, 1960, to John and Anna Olson. Chris was born on March 3, 1962, in Washington, PA, to Lawrence (Judy) Jones and Sandra (Robert) King. They spent their lives in Windham, and both were Windham High School graduates, as well as lucky enough to be high school sweethearts. Joe and Chris married in 1981 and started their family of two girls and a boy in 1983. Joe was a proud Superintendent of Hummel Construction in Ravenna until his death. Chris was retired, but spent many years employed as a House Coordinator at Coleman Professional Services. Joe and Chris spent a lot of their time camping at Cutty’s Sunset, where they had many friends that became part of their family. They enjoyed their Harley Davidson Ultra Classic and the adventures it took them on. Joe and Chris’s largest source of pride and enjoyment came from their children and grandchildren, whom they loved to spend time with. Joe and Chris will be deeply missed by their children, Carrie (Kevin) Gonsalves, Holly (Bill) Burns, and Brian (Brittany) Olson; grandchildren, Tyler, Kyla, Kasin, Sophia, Audrey, and Jolene; Joe’s siblings, Patricia (Gene) Duffy, Monica (Gary) Miller, John (Annette) Olson, Anna (Kevin) Malone, James (Sally) Olson, and Marian Angus; Chris’s siblings, Sherrie (Henry) Luli and Marc (Beverly) Jones; beloved pets, Cocoa and Jazzy, as well as many aunts, uncles, nephews, nieces, cousins, and dear friends. They were preceded in death by their parents, John, Anna, Lawrence, Sandra and Robert. The family would like to invite friends for a visitation to honor Joe and Chris on Monday, June 6, 2022, from 3:00 P.M. – 7:00 P.M. at Mallory-DeHaven-Carlson Funeral Home & Cremation Services, 8382 Center St., Garrettsville, OH 44231. Another visitation will be Tuesday, June 7, 2022, from 10:00 A.M. – 11:00 A.M., with a funeral service beginning at 11:00 A.M., Rev. James P. Lang officiating. Per Joe and Chris’s wishes, they will be cremated, then buried privately at Windham Township Cemetery. Donations would be graciously accepted by the Portage County Animal Protective League, https://portageapl.org/donate/, PO Box 927, Ravenna, OH 44266, in Joe’s and Chris’s names, to honor their memory.

The family of JOE & CHRIS OLSON created this Life Tributes page to make it easy to share your memories.

Send flowers to the Olson family.