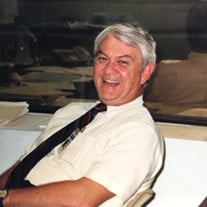 John Bernard Murrin, age 84, of Medina, Ohio, passed away peacefully after a long and bravely fought battle with kidney disease on March 5, 2022. He was born June 28, 1937 in Parkersburg, WV to the late Julian and Helen (nee Brooks) Murrin. In his youth Jack played football and basketball at Charleston Catholic High School. He was awarded the Mike Safie Trophy for outstanding athleticism. Jack graduated in 1956 and received a full athletic scholarship to Notre Dame University where he played football alongside great athletes such as Paul Hornung. Jack had a sports injury and completed his education at Morris Harvey College in Charleston, WV where he met and married Nancy Harder. Together they raised three children - John, Jeffrey, and Elizabeth. Jack enjoyed a 26 year career at Union Carbide Corporation which took him and his family many places including Charleston, WV, New Orleans, LA, and Houston, TX. Jack was an avid golfer. He frequently played a round with his brothers and sisters at locations around the country. He retired from the Boeing Company - Houston, TX and lived there for many years until relocating to northeast OH to be with his family in 2016. Jack was always organizing family gatherings. He particularly enjoyed Sunday family breakfast and was well known as a "regular" at Bob Evans! Jack will be remembered most fondly for his decisive manner to solve concerns, his daily phone calls to his children and family with the "report" of the day, and asking for our "report" in turn. Jack was gregarious, a charmer, and great story teller, with a warm, giving, sweet, kind and compassionate spirit. He read many sources of news and could always hold a conversation about contemporary events. Jack could have pursued a career as an author but never acted upon that secret wish. He will be dearly missed by his daughter, Elizabeth Murrin Barnes of Medina, OH and son, Jeffrey B. (Cheryl) Murrin of Medina, OH; granddaughters, Sarah Murrin and Emily Murrin; sister, Anne (Ben) Scott of Gatlinburg TN; nieces, Diana (Jeff) Simms of Palm Beach Gardens FL, and Elizabeth (Greg) Gong of Bakersfield CA and many personal friends in the states of WV, CA, TX and OH. He was preceded in death by his former wife, Nancy Harder Murrin; second wife Betty Calabrese Murrin; son, John A. Murrin; brothers, Michael, William, and Smith Murrin; and sister, Mary Murrin Painter. Friends may join the family for visitation Sunday, March 13, 2022 from 3:00 p.m. to 4:00 p.m., with service to follow at 4:00 p.m. at Carlson Funeral Homes & Cremation Services, 3477 Medina Road, Medina, OH 44256. A private interment will be held at Spring Grove Cemetery in Medina, OH. The family wishes to thank the staff of Brookdale South-Medina and Fresenius Kidney Care-Brunswick for their care and support. He enjoyed flirting with the ladies, discussing politics and sports, and sharing factoids/trivia for those with whom he interacted. His cherished routine included wheeling up and down the halls looking for banter, a newspaper and free back scratches. He was a well loved resident and patient of these facilities.

John Bernard Murrin, age 84, of Medina, Ohio, passed away peacefully after a long and bravely fought battle with kidney disease on March 5, 2022. He was born June 28, 1937 in Parkersburg, WV to the late Julian and Helen (nee Brooks) Murrin. In... View Obituary & Service Information

The family of JOHN "JACK" MURRIN created this Life Tributes page to make it easy to share your memories.

Send flowers to the Murrin family.