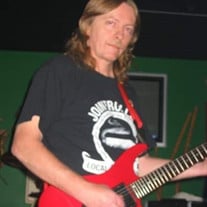 Joseph "Willie" Prockup, 64, of Brunswick, exited the stage with music playing and his loving family by his side on Monday, May 23, 2022. He was born in Chicago on September 16, 1957, to the late Mildred Rottorff, who raised Willie with his stepfather, Don Prockup. He was born a Navy brat, one of four remaining siblings. Willie's 3 sisters were instrumental in providing the background and foreground to his childhood, and he remained close to them throughout his entire life. He also loved working with his hands and over years developed the skills that would lead him to his career as a cabinet maker and master finisher. Forty years of Willie's work is displayed in homes and businesses across the country. Those who had the honor to know and love him were always greeted by his warm smile, a joke, contagious laughter, and a cold beer. The best evenings were always spent making music and smiles. Willie was a man who affected so many in such a short life. His tender love of music is something that will be carried on by his children, grandchildren, and his many bandmates from Gadzooks, The Bones, and 40 Oz's to Freedom. While his musical style evolved over the years, it never waned. Willie never played a gig without his custom red Jackson in hand. The sound of his guitar will remain legendary among his family and friends. Leaving to carry on his memory is his partner and best friend of nearly 35 years Robin "Rabbit" Reynolds; children, Eric Prockup and Vanessa Prockup; stepchildren, James Schultz and Erica Carr; grandchildren, Logan, Alexander, Emmalyn, Rheanna, and Rayma; sisters, Francine, Margarette "Peggy", and Jennifer, as well as many nephews, nieces, bandmates, and good friends. He is preceded in death by his mother and stepfather. Per Willie's wishes, he is to be cremated. Services for Willie are private and were entrusted to Carlson Funeral Homes & Cremation Services, 1642 Pearl Rd., Brunswick, OH 44212.

Joseph "Willie" Prockup, 64, of Brunswick, exited the stage with music playing and his loving family by his side on Monday, May 23, 2022. He was born in Chicago on September 16, 1957, to the late Mildred Rottorff, who raised Willie with his... View Obituary & Service Information

The family of JOSEPH PROCKUP created this Life Tributes page to make it easy to share your memories.

Send flowers to the Prockup family.