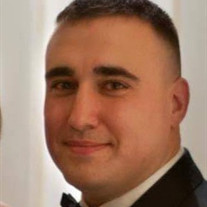 Joshua "Josh" Edwards was a caring father, husband, son, brother, and friend. The Lord took him suddenly on Saturday June 19, 2021 at age 42. Josh was preceded in death by his father Daniel Edwards, and survived by his surrogate parents, Linda and Gary Anello, wife, Melinda, children, John, Anthony and Brennan, Aunt Dee Dee and Uncle Chuck, and all his military brothers and sisters which were more family to him than his blood relatives. There was nothing more important to him than his children. He looked forward to lifting weights, going to the gun and archery ranges, and making up bro-dozer country songs and absurd Asylum Film titles and descriptions with them. He was a lover of science and dogs, whiskey and cigars, and strived to make everyone laugh all the time. Josh was a true patriot. He was a dedicated Major in the New Mexico Army National Guard after serving with the Ohio Army National Guard and serving 4 years in the Marines. He celebrated his birthday every November 10th even though that is not the day he was born. In his civilian life he was a CBRN scientist that worked with the Department of Defense. With all his military experience you'd think he was extra clean, but clean he was not. After dinner his favorite quote was "Just leave it, I'll get it later." Well, he got me good one last time and once again, I had to do the dishes. In life he was loved by many, he will be greatly missed. The family would like to invite friends to join them for a Visitation to honor Josh on Wednesday July 14, 2021, from 11:30-12:30 at Carlson Funeral Homes & Cremation Services, 3477 Medina Rd. (Corner of Rt 18 and River Styx Rd) Medina, Ohio. A prayer service will begin at at 12:30. Burial with full Military Honors will immediately follow at the Ohio Western Reserve National Cemetery, 10170 Rawiga Rd., Seville.

Joshua "Josh" Edwards was a caring father, husband, son, brother, and friend. The Lord took him suddenly on Saturday June 19, 2021 at age 42. Josh was preceded in death by his father Daniel Edwards, and survived by his surrogate parents,... View Obituary & Service Information

The family of JOSHUA "JOSH" DANIEL EDWARDS created this Life Tributes page to make it easy to share your memories.

Send flowers to the Edwards family.