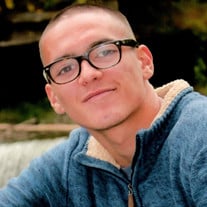 Joshua Lee Schwandt, age 19, of Medina, Ohio was a beloved son, brother, grandson, nephew, friend, and coworker. He passed away suddenly due to a tragic accident on June 21, 2020. Josh was born on June 13, 2001 in Middleburg Heights, OH to Steve and Diane (Ivcic) Schwandt. Josh attended Medina city schools, and graduated in 2019 from the Medina County Career Center in Construction Trades. He worked as a carpenter for Servepro of Barberton/Norton, Ohio, where he will be greatly missed. During his short time there he had the opportunity to travel and work in many different cities and states. He loved sharing with his family, especially with his dad, the stories and experiences he was having in his daily life, like jet skiing, boating, and just hanging out with his coworkers. Josh was always the first to tell a joke, including "Yo Mama" jokes during family dinners, or to lend a hand to someone in need. He had a personality that would light up a room, and a heart of gold. He was known to drive 3 hours to visit his brother in college for just a quick visit. They were not only brothers, but best friends. Josh was a free spirit, he spoke what he was thinking, and lived a carefree life. He was a firm believer in the “work hard, play hard” lifestyle, and loved all his "toys". You could find him out on his motorcycles, dirt bikes, or even playing in the back yard with his blow gun. If not on his vehicles, you could find Josh out fishing somewhere. Josh had a knack for getting others go along with his shenanigans, including getting his mom to fall in love with bearded dragons. At first, Diane was having no part of reptiles, but quickly learned that Josh was correct, and they are not bad. She now loves her Izzy the lizard. His relationship with his brothers was very strong, but sometimes it wasn't always calm. During a heated PlayStation match, Jake recalls seeing a remote control being thrown toward him from Josh's direction, and before he knew it, he woke up in the ER, with stiches in his eyebrow. Not to be outdone by his brother, Johnny and Josh were in a wrestling match, and Johnny threw Josh into a computer, thus leaving a gash on his forehead, also resulting in stitches and a scar. The age old adage "boys will be boys" was surely true for these boys. The love of soccer shared between the three brothers left a path of destruction throughout the Schwandt house. During a forbidden indoor match, while the parents were away, one of the decorative plates was broken. This plate, according to the boys, had to be pieced back together several times. It took some finger pointing, and snitching, in order for the truth to actually come out. It was instances like this that gave the boys a strong, loving bond. Friends were a big part of Josh's life. Everyone has a story to tell of times with Josh that includes lots of laughter, fun and great memories. We hope that you can share some of yours with us below. Josh is survived by his loving and supportive parents Steve and Diane; his brothers, Jake Schwandt (Jocelynn Lucas) and Johnny Schwandt; his grandmother, Dorothy (Booher) Schwandt; his grandparents, Frank and June Ivcic; many aunts, uncles, cousins, friends, and co-workers. He will be greatly missed by his work, soccer and scout families. He is preceded in death by his grandfather James Schwandt. Josh will never be forgotten, because he made such an impact on everyone’s day, and everyone’s life. It has been said that he is a “rainbow on a stormy day”. And in Josh’s way... "Peace Out”. A public visitation will be held for Josh on Thursday, June 25, 2020 from 4:00 PM to 7:00 PM at St. Ambrose Catholic Church, 929 Pearl Road, Brunswick, OH 44212. A Mass of Christian Burial will be held on Friday, June 26, 2020 at 10:00 AM (meet at the church). All who attend are required to wear a mask and are asked to practice social distancing. Josh's care has been entrusted to Carlson Funeral Homes & Cremation Services, 3477 Medina Road, Medina, OH 44256. In lieu of flowers, the family is requesting that donations be made to the GoFundMe account that was established in Josh’s name at www.gofundme.com, or a charity of your choice.

Joshua Lee Schwandt, age 19, of Medina, Ohio was a beloved son, brother, grandson, nephew, friend, and coworker. He passed away suddenly due to a tragic accident on June 21, 2020. Josh was born on June 13, 2001 in Middleburg Heights, OH to Steve... View Obituary & Service Information

The family of JOSHUA LEE SCHWANDT created this Life Tributes page to make it easy to share your memories.

Send flowers to the SCHWANDT family.