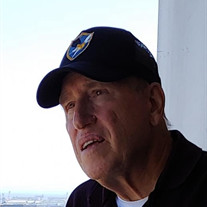 Larry F. Brandal, age 73, of Medina, passed away on May 7, 2020. He was born on November 1, 1946, in Bellevue, OH to the late Clarence and Sylvia Brandal. Larry served in the U.S. Army from 1967-1971. He met his wife, Choe, in 1970 while stationed in Seoul, South Korea. He then, went on to The Ohio State University and graduated with a Bachelor's Degree in Geography. Larry worked for the Veterans Administration from 1974-2012. Upon retirement, he went back to work with the Veterans of Foreign Wars for five years. Larry will be remembered for his love of gardening and his remarkable ability to fix anything around the house, but most notably he will be remembered for his willingness to always lend a helping hand to family, friends, neighbors, and veterans. He will be dearly missed by his beloved wife of 49 years, Choe Brandal; his loving daughter, Lynda Brandal; and his dear siblings Lois Dunbar (Charles) and William C. Brandal (Ruth); he is also survived by several nieces and cousins. He was preceded in death by his twin brother, Gary Brandal. The family would like to invite friends to a Memorial Service on Thursday July 15th at 11:00 am at Carlson Funeral Homes & Cremation Services, 3477 Medina Road, (corner of Rte 18 and River Styx Rd.) Medina, Ohio. Burial to follow at Ohio Western Reserve National Cemetery, Seville, Ohio. In lieu of flowers, donations may be made in Larry's name to the American Cancer Society or to the Veterans of Foreign Wars.

The family of LARRY F. BRANDAL created this Life Tributes page to make it easy to share your memories.

Send flowers to the Brandal family.