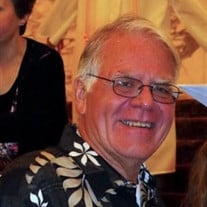 Lawrence "Larry" L. Gardner, age 68, of Medina, passed away on August 22, 2021. He was born on September 6, 1952 to the late Lawrence B. Gardner and George and Alice Pieh (nee Koran). Larry retired from Ford Motor Company in 2012 after 36 years as a machine repairman. He was a Harley enthusiast, taking many motorcycle trips with friends. He enjoyed trips to the Smokey Mountains and his Tuesday morning breakfast with "The Boys." His sense of humor and quick wit were second to none. Larry enjoyed fishing, bowling, and hunting when he was able. He was a handyman that loved woodworking and building projects in his backyard barn. Larry and Billie were snowbirds traveling annually to Clearwater, Florida. While there, they enjoyed walks on the beach, watching the beautiful Florida sunsets, and Friday night dinners with friends. Bonfires in the backyard were a special time shared with family and friends that were near and dear to Larry. He lived life to the fullest and his world revolved around his wife, children, grandchildren, and great grandchildren. Larry will be dearly missed by his beloved wife, Billie Gardner (nee Cooper); his children, Larry Gardner Jr. (Julie), Brenda Arnold, Nick Gardner (Josie), and Katie "Ethel" Chapman (Bobby); his grandchildren, Lance, Darren, Job, Trent, Makena, Morgan, Jack, and Rae; his great grandchildren, Emma, Nora, Braelynn, and Brooklynn; and his beloved dog, Dyna; his siblings Terry Pieh (Gail), Danny Pieh (Helena), Loretta Hendler (Pete), and Matt Pieh (April); and his brother-in-law, Bill Cooper (Wendy). Larry's is also survived by many dear nieces,nephews and special friends. He was preceded in death by his brothers Randy Pieh, Marty Pieh, and Tim Pieh. Friends may join the family for visitation on Saturday, August 28, 2021, from 10:00 a.m. to 1:00 p.m. at Carlson Funeral Homes & Cremation Services, 3477 Medina Road, Medina, OH 44256. In lieu of flowers, the family encourages you to do something special with your family or contribute to any Veteran's organization in Larry's memory.

The family of LAWRENCE L. GARDNER created this Life Tributes page to make it easy to share your memories.

Send flowers to the Gardner family.