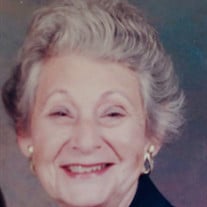 Margaret L Beckwith (nee Jenkins) of Cape Coral, Florida, formerly of Medina, passed away on January 3, 2022, at the age of 97. She was born on August 21, 1924, at Akron, Ohio and was the older of two daughters born to Wilbur and Margaret (nee Dussel) Jenkins. She was preceded in death by Ray Beckwith, her loving husband of 62 years, her mother Margaret Jenkins, and her sister Carol VonGunten. Margaret and Ray made their home and raised their family of three children on their beloved Butterspoon Farm in Medina, Ohio. She will be missed by her son Stephen Beckwith; her daughter and son-in-law Barbara and Mike Stacy; daughter Carol Beckwith and Robert Bartley; her granddaughters Jennifer Stacy and Amanda Plummer and her husband Jason Plummer; her great-grandchildren Sarah, Morgan, Kamryn, and Austin; nieces, nephews, and friends. The family wishes to extend its sincere gratitude to Sarah Simpson, who has been a dear friend and helper to Margaret for many years. Margaret was a talented interior designer and business owner, having spent many years co-owning Then and Now Interiors with her sister Carol and her daughter Barbara. Margaret dedicated much of her spare time volunteering for the Medina County and Ohio 4-H as a club advisor when her children were active with the program. She expanded her role to work as an Extension Assistant with the Medina County Co-operative Extension Service. She also donated hundreds of hours as a volunteer with the Medina Community Hospital. Friends may join the family for visitation for Margaret on Saturday, January 15 from 10:00 until 11:00 at Carlson Funeral Homes and Cremation Services, 3477 Medina Road (Route 18), in Medina. The Funeral Service will be held at 11:00, immediately following the visitation, at Carlson Funeral Home. Interment will follow the service at the Medina Township Cemetery on Fenn Road in Medina. In lieu of flowers, the family asks that contributions in memory of Margaret be given to the local Medina County 4-H program, 120 West Washington Street, Suite 1-L, Medina, Ohio 44256, or to the Stewart's Caring Place, (Cancer Wellness Center) 3501 Ridge Park Drive, Fairlawn, Ohio 44333. Please write "In Memory of Margaret Beckwith" on the check comment line.

Margaret L Beckwith (nee Jenkins) of Cape Coral, Florida, formerly of Medina, passed away on January 3, 2022, at the age of 97. She was born on August 21, 1924, at Akron, Ohio and was the older of two daughters born to Wilbur and Margaret (nee... View Obituary & Service Information

The family of MARGARET L. BECKWITH created this Life Tributes page to make it easy to share your memories.

Send flowers to the Beckwith family.