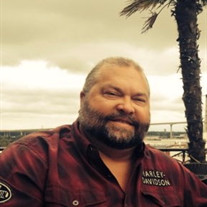 The Life of Mark R. Waickman Mark Richard Waickman entered this world on September 12, 1961. He was the first baby boy of two proud parents Richard and Margaret (Schmidt) Waickman. "He was an angel" Marge said when asked about how he was... View Obituary & Service Information

The family of MARK RICHARD WAICKMAN created this Life Tributes page to make it easy to share your memories.

The Life of Mark R. Waickman

Send flowers to the Waickman family.