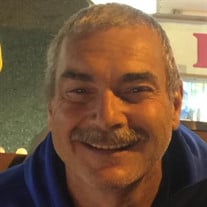 Martin G. Stallsmith, of Randolph, formerly of Garrettsville, passed away with his loving family surrounding him on Monday, April 18, 2022. He was born October 7, 1965, in Bedford to the late Carol (nee Vandervort) Pfile, who later married Thomas Pfile, and he raised Marty alongside Carol. He loved going on vacation with his wife and children; some of his favorite trips were to Disney World. Marty also enjoyed watching football, especially his beloved Browns. He loved snow; when it snowed, you could find Marty playing in the snow with his kids as well as helping his neighbors plow their drives. He enjoyed watching his son wrestle, scuba diving with his daughter, and spending holidays with his family. Marty was always ready for a new adventure, from surfing in Hawaii to zip lining in Puerto Rico. in all of Marty's and his family's travels, he relished in finding the restaurants with the best tasting food. Marty was a member of the Ohio and Gibsonton Showman's Association. He was talented building and renovating the concession trailers, along with some other crafts and protects around the house; some he was good at starting, but sometimes they were left unfinished. Marty was an awesome problem solver; he was quite the handy man when needed, whether he was working on cars and trucks, or if any problems arose with the concession trailers. Marty will be deeply missed by his beloved wife of 35 years, Lynn; children, Dillon Stallsmith and Katie (Nolan) Stallsmith-Chacon; nephew, Garrett McArdle, brothers-in-law, Byron Bragg and Robby (Patty) Moegerle; sister-in-law, Judy (Adam) Fleming, as well as other nephews, nieces, and many, many friends. He was preceded in death by his parents and his sister, Tracy McArdle. The family would like to invite friends for a visitation for Marty on Tuesday, April 26, 2022, from 10:00 A.M. - 1:00 P.M. at Mallory-DeHaven-Carlson Funeral Home & Cremation Services, 8382 Center St., Garrettsville, OH 44231. A funeral service will begin at the funeral home at 1:00 P.M. Marty will then be laid to rest immediately after at Park Cemetery, Center St. & Brosius Rd., Garrettsville, OH 44231, where he will be placed by his mother and sister.

Martin G. Stallsmith, of Randolph, formerly of Garrettsville, passed away with his loving family surrounding him on Monday, April 18, 2022. He was born October 7, 1965, in Bedford to the late Carol (nee Vandervort) Pfile, who later married Thomas... View Obituary & Service Information

The family of MARTIN G. STALLSMITH created this Life Tributes page to make it easy to share your memories.

Send flowers to the Stallsmith family.