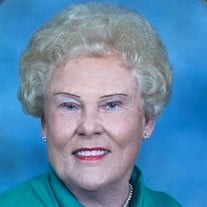 Mary E Keating (Duffy), age 91, of Medina, Ohio, passed away on Thursday, August 5, 2021. She was born on November 24, 1929, in San Antonio, Texas to Robert and Marie (McLaughlin) Duffy. She loved to spend time with her kids, grandchildren, and great grandchildren. She truly loved teaching her students, golfing, bridge playing, reading and listening to music. Mary is survived by her daughters, Ann (Gene) Reusch, Jean (James) Letterly, Kathy (Joel) Lucas, and Michele (Anthony) Raffa; sons, Barry (Laurie) Keating and Kevin (Mary) Keating; grandchildren; Adam, Brad, Sean (Kate), Patrick (Lindsay), Brandon, Brittany (Greg), Jimmy (Karen), Matthew (Julie), Cassidy (Andrew), Jennifer (Joshua), Erin, Jordan (Keith), Luke (Sydney), and 15 great grandchildren. She was preceded in death by her parents, her husband Gordon Keating, and granddaughter Jessica Lucas. Mass of Christian Burial will be held at Holy Martyrs Catholic Church, 3100 Weymouth Rd., Medina, Ohio on Tuesday, August 10th at 10:00 am. Burial to follow at Granger Cemetery 1627 Wilbur Road Medina, Ohio 44256. Donations will be graciously accepted by Cleveland Clinic Hospice at Home, 6801 Brecksville Rd., Independence, Ohio 44131, or the American Cancer Society, 10501 Euclid Ave, Cleveland, Ohio 44106 in memory of Mary. Arrangements were entrusted to Carlson Funeral Homes & Cremation Services 3477 Medina Rd, Medina, OH 44256. Mary was born in San Antonio, Texas, but her family moved around a lot because her father worked for the Pullman Company. During the Great Depression and WWII, her father was furlonged from the railroad company because the US government took control of the trains in order to move miliary troops. Her family moved to Denver, Colorado where her father bought a corner grocery store. Mary had no siblings,so she had great care and attention from her mother, who read to her and taught her many things. Mary began 1st grade at age 4 and graduated high school at age 16. She entered Marygrove College in Detroit, MI, and graduated, in 1950, at the age of 20 with a sociology and education degree. She taught elementary school in Detroit for 3 years before being married, in 1953, to a man who was a brother to a couple of her good friends. Her husband was a chemist at PPG in Detroit. Mary had 6 children, 4 who live in Ohio, one in Texas, and one in Florida. There are 4 girls and 2 boys. She has 13 grandchildren and 15 great-grandchildren. Mary stayed home to raise her 6 children, until the last child was in kindergarten, and then she began public school teaching again. She taught in the elementary school for 28 years, for the most part at Liverpool School in Valley City (Buckeye District). She and her husband moved from Milwaukee, WI to Medina in 1969, she lived here for 52 years. Mary divorced in 1989 and bought an old, charming cottage on Lake Erie, where she entertained her 13 grandchildren, great grandchildren, and her 6 children and their spouses each summer. Travel includes the Caribbean, Bahamas, France, Italy, Spain, Ireland and Germany, plus several cruises. Mary loved to play Words With Friends on her IPad, and she enjoyed reading, watching TV, listening to music and playing golf. Playing bridge was a favorite past time. Genealogy tells her that her family came over from Ireland in the mid 1800's and that several generations of men were brick layers. In 1954, at 4 months pregnant with her 2nd child, Mary contracted polio. Five months later, while still in the hospital with polio, she gave birth to a healthy baby girl. Mary received many months of daily therapy at a Sister Kenney Hospital in Farmington, MI., followed by 6 months of daily outpatient physical therapy. This was a traumatic and difficult time for Mary and her extended family, especially since she had a toddler, Ann, a new infant, Jean. Mary has done physical therapy all 66 years of her life since getting polio, trying to lead a normal life....and she succeeded! Religion and faith were very important to Mary, and she loved her family fiercely. They gave her strength and joy everyday.

Mary E Keating (Duffy), age 91, of Medina, Ohio, passed away on Thursday, August 5, 2021. She was born on November 24, 1929, in San Antonio, Texas to Robert and Marie (McLaughlin) Duffy. She loved to spend time with her kids, grandchildren,... View Obituary & Service Information

The family of MARY E KEATING created this Life Tributes page to make it easy to share your memories.

Send flowers to the Keating family.