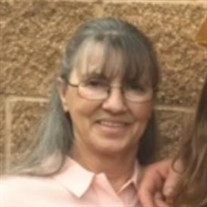 Molly Ann Stebner, aged 70, of Garrettsville, passed away unexpectedly on Monday, April 11th, just 7 days prior to celebrating her 71st birthday. Molly was born on April 18th, 1951, to Stanley and Margaret (O'Donnell) Savitts in Warriors Mark, PA. At age 4, she moved with her family to Hiram, where she was raised to be a strong, hardworking, and independent "country girl" alongside her eleven brothers and sisters. The hardworking values Molly learned being raised on a farm stuck with her for life. Always working, she held numerous positions throughout her life to support her daughters including ten plus years at Bil-Mar and more than 20-years at Aurora Manor. In September of 1989, Molly married Wayne Stebner in Ravenna and remained his spouse until her passing. The joys of Molly's life were her husband, two daughters, Connie (Scott) Moody and Brenna Milano along with her three grandchildren, Max (26), Ally (24), and Lillianne (10). Molly's outward persona did not tell the true story of who she was. Yes, she could certainly be tough, opinionated, strong minded, and fiercely independent. And she was known to hold a grudge or two in her time. Unfortunately for many, all they got to see from Molly were those rougher edges. But those able to get past the tough exterior were rewarded with the real Molly. Molly was a woman of faith, serving as an active member of the First Congregational Church of Freedom for over 30 years. Every Saturday, she and Wayne volunteered their time to hand clean the 177-year-old church building to ensure the congregation had a clean place to worship. As a housekeeper at Aurora Manor, she did more than just clean rooms. She was a friend, a member of the residents' extended families, and someone who always had time for a resident that just needed someone to talk to. She delighted in telling Wayne and her girls about her friends at Aurora Manor and whenever she did, she was all smiles. Molly loved children. As she was known to say, "there is no such thing as an ugly baby." They were all beautiful in her eyes. And she never encountered a baby that was too fussy or ornery to hold. She welcomed the challenge of a crying or colicky baby and always ended up holding a happy and smiling one. She welcomed kids in need into her home and treated them like they were her own. While she loved all her nieces and nephews, a few held an extraordinary place in her heart. She mourned the loss of her special angel-Tina Dawn all her days. Samantha Jean, Janie & Joey are just a few more of the special children that she treasured. Molly was a genuinely humble woman. Her happiest times were sitting in her yard enjoying a summer cookout surrounded by her girls, yelling at Wayne not to burn the hamburgers, and watching her grandkids tear around the yard in the yellow go-kart her and Wayne bought them for Christmas. On a frigid winter weekend, you could find Molly and Wayne in their living room, working on a puzzle, watching a Gunsmoke, Bonanza, or Dark Shadows marathon on TV and topping the day off with a game of Yahtzee, and she could not have been happier. Molly's greatest treasures were her family. Wayne, her girls, and her grandchildren were her world. She overflowed with pride for her girls and there was not a thing on this Earth she would not do for her grandkids. Her family, her little white house and yard, and her church. This was the real Molly, someone everyone would be lucky to have as a wife, mother, grandmother, sibling, or friend. In addition to Wayne, her daughters, and grandchildren, she is survived by her sisters, Esther Martin (Glenn) and Susie Sindledecker. Molly was preceded in death by her brothers Calvin Savitts, John Savitts, Leroy Savitts, Walter Savitts, and Stanley (Bub) Savitts as well as her sisters, Margaret (Sis) Hill, Arlene Thompson, Sara Bostic, and Beverly Savitts. A visitation for Molly will be held on Monday, April 18, 2022, from 5PM - 7PM, at Mallory DeHaven Carlson Funeral Home and Cremation Services, 8382 Center St., Garrettsville, OH 44231. A funeral service will be held at the funeral home Tuesday, April 19, 2022, at 11:00 AM, with Pastor Jody Hill officiating. Molly will then be laid to rest immediately after the funeral service at Fairview Cemetery in Hiram.

The family of MOLLY A. STEBNER created this Life Tributes page to make it easy to share your memories.

Send flowers to the Stebner family.