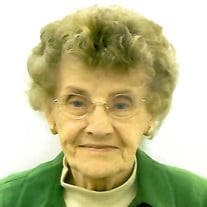 Nellie Ann Connelly (nee Warchol), age 97, of Medina, passed away on Saturday, December 11, 2021. She was born on September 16, 1924 in Uniontown, PA to the late Lawrence and Mary (nee Lendecki) Warchol. Nellie enjoyed playing the lottery and watching game shows. She was an avid fan of the Cleveland Indians and the Browns. Nellie also enjoyed traveling and she participated in the Senior Olympics. She will be dearly missed by her children, Debra (Ron) Mifflin, Carol (Mike) Ludinsky James (Kelly) Connelly, Bernell (Kathleen) Connelly, Lawrence (Kelly) Connelly; her sister, Helen Vaughan; her twelve grandchildren and three great-grandchildren. She was preceded in death by her three brothers, Lawrence Warchol, Joseph Warchol, and Frank Warchol; and her sister, Mary Warchol. A Memorial Gathering will be held at Carlson Funeral Homes & Cremation Services, 3477 Medina Road, Medina, OH 44256, on Tuesday, December 21, 2021 from 4:00-6:00 p.m. followed by a service at 6:00 p.m. In lieu of flowers, donations may be made in Nellie's name to the Medina County SPCA, 8790 Guilford Rd., Seville, OH 44273 https://interland3.donorperfect.net/weblink/weblink.aspx?name=E354241&id=5.

The family of NELLIE ANN CONNELLY created this Life Tributes page to make it easy to share your memories.

Send flowers to the Connelly family.