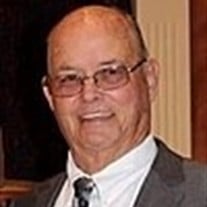 Norman Clark Sr, 85, of Windham, passed away at his home, surrounded by his loving family, on Wednesday, October 21, 2020. He was born December 3, 1934, in Ironton, Ohio to the late Livingston & Annabelle (Sites) Clark. Norm enjoyed hunting, golfing and spending time with this family. Making apple butter was a treasured family tradition carried on by Norm and his extended family and friends. Norm was a proud member of the Windham Lions Club for 45 years. He received the Lion of the Year award for 1988 -1989 and the Melvin Jones District 13 Award 'In recognition of your distinguished service as a 'Knight of the Blind' in 2019. Norm was also a member of the Windham United Methodist Church. Norm will be deeply missed by his loving wife, Helen, with whom he was blessed to share 65 years of marriage. They were high school sweethearts and have been together for 68 years. He is also survived by his children; Norm (Nancy) Clark from Greeneville, TN, Diana Clark (Walt) Yourstone from Jekyll Island, GA, Barbara Clark (Kelvin) Braden of Windham, OH, Susan (Dan) Rath of Strongsville, OH, and David (Linda) Clark of Newton Falls, OH. His grandchildren; Monica, Katie, Meredith, Samantha, Megan, Andrew and Matthew. He is also survived by his siblings; Don Clark, Ralph Clark, and Paul (Jenny) Clark. In addition to his parents, Norm is preceded in death by his siblings Larry Clark and Margaret Miller. In lieu of flowers the family asks you to please donate to the Windham Lions Club or the Windham United Methodist Church at 9051 N. Main St, Windham, Ohio 44288. Visitation will be Sunday, October 25, 2020, 1 to 2:00p.m. with the funeral service immediately following at Mallory-DeHaven-Carlson Funeral Home & Cremation Services 8382 Center Street, Garrettsville, Ohio, 44231. Burial will be at Windham Township Cemetery. Masks must be worn, and social distancing rules will apply.

Norman Clark Sr, 85, of Windham, passed away at his home, surrounded by his loving family, on Wednesday, October 21, 2020. He was born December 3, 1934, in Ironton, Ohio to the late Livingston & Annabelle (Sites) Clark. Norm enjoyed hunting,... View Obituary & Service Information

The family of NORMAN L. CLARK SR. created this Life Tributes page to make it easy to share your memories.

Norman Clark Sr, 85, of Windham, passed away at his home, surrounded...

Send flowers to the CLARK family.