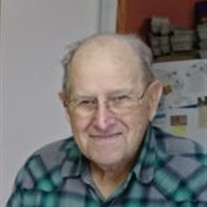 Norman R. Wood, 90, of Hiram, passed away Sunday, June 12, 2022. He was born November 3, 1931, in Cleveland, to the late Millard and Helen (Greene) Wood. Norm was the last of a lengthy line of Wood children raised in Windham during the Great Depression. He stayed on his family farm 5 years after graduating from Windham High School, and married his wife, Mary, 2 years later. They moved to a farm in Hiram, where he also worked at Hiram Township into supervisory position. Norm and Mary hosted many picnics with nearly 50 family members, in the hay loft, to the apple orchard, and horseback riding, too. Those were the days Norm could not get enough of , when laughter never seemed to end. Norm later excepted a position at Hiram Village Water and Sewer Systems that eventually included Street Commissioner , all single handedly while farming. He finally encouraged the Village to permit the building of the Street Garage and hire a couple of men and some machinery (he had been using his own previously). After 20 years of service, Norm left to build up his own business of hauling animals from Virginia to Missouri and managed his farm. He enjoyed raising farm animals and experienced several different venues, but horses and ponies were his greatest love. Norm provided training for Future Farmers of America, at Maplewood Agri-Business, in the 80's. He also had many friends in the Amish community; he had a full life and was loved by many. Norm will be deeply missed by his loving wife of 67 years, Mary (Begin); children, Susan Shields, Donna Stiles, Bob Wood, and John Wood; grandchildren, John (Rama) Stiles, Kristen (Jeff) Edmonson, Rob (Kristin) Wood, and Danielle (Coy) Wilson; great grandchildren; Brookelynn, Kohen, Roman, Camden, Kendall, Jack, Isaac, Raven, Braylon, and Juliane, as well as the many wonderful and caring nephews, nieces, neighbors and friends. Norm is preceded in death by his parents, his daughter, Diane, and his siblings. Norm is to be cremated, per his wishes. The family would like to invite friends to a Celebration of Life to honor Norm on Sunday, June 26, 2022, from 1:00 P.M. - 5:00 P.M. at the Troy Community House, 13950 Main Market Rd, Burton, OH 44021. Care for Norm was entrusted to Mallory-DeHaven-Carlson Funeral Home & Cremation Services, 8382 Center St., Garrettsville, OH, 44231.

Norman R. Wood, 90, of Hiram, passed away Sunday, June 12, 2022. He was born November 3, 1931, in Cleveland, to the late Millard and Helen (Greene) Wood. Norm was the last of a lengthy line of Wood children raised in Windham during the Great... View Obituary & Service Information

The family of NORMAN R. WOOD created this Life Tributes page to make it easy to share your memories.

Send flowers to the Wood family.