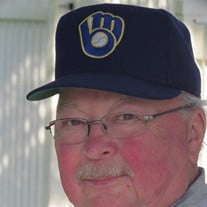 Paul W. Hischke, age 84, of Medina, Ohio passed away peacefully surrounded by his family on June 12, 2020. He was born on December 25, 1935 in Kingsford Heights, MI to Henry and Opal (nee Peterson) Hischke. Paul was a loving husband, father, grandfather, brother, uncle and a friend to all. He leaves to cherish his memory, the love of his life for 60 years, his wife Katharina, his son Mark Hischke (Barb), daughter Heidi Curie (Craig), granddaughter Amanda Fintel (Kyle), grandsons Chad and Brandon Curie, sister Lois Donbert (Richard deceased), sister Marlene Nelson (Wayne), sister in laws Toshiko (Robert) Hischke and Daniele (James) Hischke and many nieces and nephews all of whom he loved dearly. He was preceded in death by his parents, his brothers Robert Hischke and James Hischke and his sister Loralee Hischke. Upon graduation from Barron High School, Paul followed his two older brothers and entered the United States Air Force in 1953. He served his country honorably for 23 years and retired at the rank of Master Sergeant. He retired in Iowa and worked an additional 24 years at John Deere as a Metallurgist, retiring in 1999. Paul was a 32nd degree Mason, and a Shriner. Paul was known for his wonderful sense of humor and put that to good use in the Shriner Clown Unit bringing lots of joy and smiles while visiting children in hospitals. He was also active with the VFW, American Legion, and Disabled American Veterans. Paul was an accomplished artist and his family will treasure the many beautiful drawings/artwork he created. Paul was a sports fan and had a special love for baseball. Being from Wisconsin, his teams were the Milwaukee Brewers and the Green Bay Packers as well as being a Cleveland Indians fan. After retirement from John Deere, Paul became an avid cyclist and loved riding his bike on the beautiful bike paths in/around Cedar Falls, Iowa. Paul believed his greatest accomplishment was his family and never missed an opportunity to express his love. Most importantly, he was a man of faith and took every opportunity to let God’s grace/light shine through him. Interment with military honors will be held at Ohio Western Reserve National Cemetery on Wednesday, June 24, 2020 at 1:00 p.m., the gathering will be limited to 30 people and masks are required. Arrangements entrusted to Carlson Funeral Homes & Cremation Services, 3477 Medina Road, Medina, OH 44256. In lieu of flowers, donations may be made in Paul’s memory to Shriners Hospitals for Children–Cincinnati, Donor Development, 3229 Burnet Avenue, Cincinnati, OH 45229.

Paul W. Hischke, age 84, of Medina, Ohio passed away peacefully surrounded by his family on June 12, 2020. He was born on December 25, 1935 in Kingsford Heights, MI to Henry and Opal (nee Peterson) Hischke. Paul was a loving husband, father,... View Obituary & Service Information

The family of PAUL W. HISCHKE created this Life Tributes page to make it easy to share your memories.

Send flowers to the HISCHKE family.