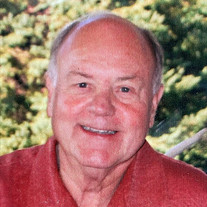 Robert Willard Greene aka Bobby Joe, 80, of Richfield, Ohio, passed away peacefully on April 21. Bob is survived by his children Michael (Peggy), Cindy and Aimee, grandchildren Rachel, Robert, Michael (Josslyn) and significant other Judy Townsend. Bob was born April 6, 1941 in beautiful Claremont, Indiana, son of Bernice and Robert Greene. After graduating from Ben Davis High School in 1959, where he lettered in football, Bob studied engineering at Chicago Allied Institute of Technology. He met his wife Virginia Jalowiecki in the windy city and the two married in the fall of 1965; they moved to Ohio in 1966 and settled in Medina. An entrepreneur and pioneer in the HVAC industry, Bob founded Air Control Products in 1975, and was a longtime member of the ASHRAE and SMACNA organizations. Bob conveyed a passion for his business, family, and community and created lifelong friendships. In his spare time, he volunteered at both Akron Children's and Medina County Hospitals, and founded Greene's Acres community garden in Broadview Heights in 2011. Bob was a true original who found pleasure in the small things. He wintered on the idyllic island of Dafuskie in South Carolina where he spent his days walking the beach, golfing and tending to the community farm. He was an avid collector, an excellent golfer, a practical joker and an adventurer. He traveled the world with his long time companion Judy Townsend - riding camels in Morocco, exploring the gardens at the Taj Mahal, golfing the rustic courses in Scotland and climbing the pyramids of Egypt. He was an inspiring individual who will be truly missed by many. Friends may join the family for visitation on Saturday April 24, 2021 from 1:00 pm until 4:00 pm at Carlson Funeral Homes and Cremation Services, 3477 Medina Rd. (Corner of Rt. 18 and River Styx Rd., Medina, Ohio. Facial coverings are required. Please observe recommended social distancing guidelines. Inurnment will be at Granger Fairview Cemetery at a later date. In lieu of flowers, the family requests that memorial donations be made to The Robert Greene Endowed Scholarship c/o The University of Akron Foundation, 375 East Exchange St., Akron, OH 44325-2603.

The family of ROBERT W. GREENE JR. created this Life Tributes page to make it easy to share your memories.

Send flowers to the GREENE family.