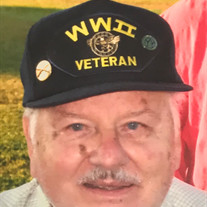 ROBERT ENGLEBERT SENKAR, age 94, resident of Brunswick, passed away peacefully on June 2, 2020, at his home. He was born on November 8, 1925, to the late Max and Marion (nee Dolenc) Senkar in Cleveland, Ohio. He was preceded in death by his wife Mary Margaret (Breon). Robert and Mary were married on May 12, 1956. The family is comforted by the knowledge that he has been reunited with his beloved wife and great friends Gene and Marie Loizzi, who were great influences on the Senkar family. Robert proudly served during WWII in the US Army from January 1944-August 1945, Company A, 355th Infantry, 89th Division in the European theater, where he received the Bronze Star Medal, -Citation reads "on April 17, 1945 during an attack on Zwickau, Germany. When he observed a seriously wounded comrade lying exposed to heavy enemy fire, Private First Class Senkar, with complete disregard for personal safety, advanced across the fire swept area to administer aid to the casualty. Although subjected to panzenfaust and automatic fire, he dressed the injured man's wounds and then moved him to a covered position. His courage and devotion to the welfare of his comrades reflected great credit upon him and were in keeping with the best traditions of the armed forces of the United States.” Bob worked as a production scheduler at Lamson & Sessions for 30 years, upon retiring he assisted his sons, Gary at Palm Beach furniture and Michael at McDonalds. After retiring Bob and his wife spent many vacations cruising the world, visiting many countries and singing karaoke. His singing voice brought the sounds of Sinatra (and many thought he was lip-syncing!). Bob joined SWCA (Southwest Cultural Arts) and performed in many stage plays, as well as designing and building sets for the productions. Notable roles included "Doc" in West Side Story, "the Padre" in Man of LaMancha, and "Tevye" in Fiddler on the Roof. Bob won many awards in singing competitions with Gotta Dance's Tour de Force. When Bob wasn't on stage or a cruise ship you could find him gardening in his yard. He will be dearly missed by his sons; Gary (Cheryl), John (Laura -Deceased), Bob (Cindy), Mike (Pat) and his grandchildren; Lynn, Julie (Aaron), James (Becka), Kathy (Mark), John Adam, Genevieve, Katie (Jon), Steven, Drew (Jacque), Joel, and Faith (Jeff), also his great-grandchildren; Laura, Rachel, David, Max, Jacob, Brady, Aria, Cadence, Piper, Urijah and Liam. A visitation for Robert will be held on Sunday, June 7, 2020, from 2:00 PM to 5:00 PM at Carlson Funeral Homes & Cremation Services, 3477 Medina Road, Medina, OH 44256, with a VFW honors service immediately following at the funeral home. Robert will be privately laid to rest at Ohio Western Reserve National Cemetery. As you pay your respects to the family we encourage social distancing guidelines and ask all guests to wear masks and respect other’s boundaries. In lieu of flowers, donations may be made in Robert’s name to Hospice of the Western Reserve, https://www.hospicewr.org/patients-and-caregivers/giving-back/Pages/Donate-Now.aspx

ROBERT ENGLEBERT SENKAR, age 94, resident of Brunswick, passed away peacefully on June 2, 2020, at his home. He was born on November 8, 1925, to the late Max and Marion (nee Dolenc) Senkar in Cleveland, Ohio. He was preceded in death by his... View Obituary & Service Information

The family of ROBERT E. SENKAR created this Life Tributes page to make it easy to share your memories.

Send flowers to the SENKAR family.