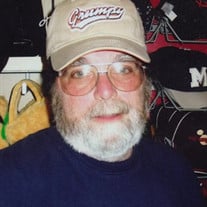 Robert "Bob" Charles Zivoder, beloved husband, father, brother, and grandfather, passed away in his home on Tuesday, September 28, 2021, with his family by his side. Bob was born in Cleveland, OH on October 19, 1948, to Charles and Theresa "Rita" (Corrigan) Zivoder. Bob was a U.S. Army veteran, serving his country during the Vietnam War. During his career Bob worked for Western Electric, Harshaw Filtrol/Solon Technologies and several other manufacturing companies, but the job he loved the most was being a school bus driver for the J.A. Garfield Schools, which he retired from. He always held a special place in his heart for his "St. Joe's Crew" and often spoke about the "crazy kids on that route". Bob met Michelle at the Tavern in Solon, where he was "holding up the end of the bar" and she was working. The two married in 1991 and moved to Nelson Township where they built a life together and raised their family. Bob was a strong supporter of his wife's dreams and assisted where he could in her business, earning him the title of executive soap maker and envelope stuffer. Whether it be teaching the boys at a very young age to ride 4-wheelers in the backyard, cheering on the Grave Digger at Monster Truck events or family vacations, his family was his world. Bob spent many years in the bleachers, auditorium, football stands, and on the sidelines when an extra hand was needed supporting the boys. Despite his gruff and grumpy exterior, Bob was a loving and caring man who will be deeply missed by his wife, Michelle; sons, Shane Zivoder, Benjamin (Andrew) Coll, Steven (Lindsey) Zivoder, Jesse (ShyAnn) Zivoder; bonus daughter, Allison Tucker; grandchildren, Gavin and Madison Zivoder; sisters, Virginia (Gary) Martin and Joan (Jerry) Musiel, and constant companion Chance, with whom he spent hours with daily, throwing tennis balls. Please join the family to celebrate Bob's life on Sunday, October 3, 2021, from 3:00 PM - 5:00 PM at Mallory-DeHaven-Carlson Funeral Home & Cremation Services 8382 Center St. Garrettsville, OH, 44231. A funeral service will follow at 5:00 PM, along with Military Honors. The family would like to thank Community EMS for all the help and support they have provided. Donations in Bob's name would be greatly appreciated, to St. Jude's Children's Hospital, https://www.stjude.org/donate/donate-to-st-jude.html.

Robert "Bob" Charles Zivoder, beloved husband, father, brother, and grandfather, passed away in his home on Tuesday, September 28, 2021, with his family by his side. Bob was born in Cleveland, OH on October 19, 1948, to Charles and Theresa "Rita"... View Obituary & Service Information

The family of ROBERT C. ZIVODER created this Life Tributes page to make it easy to share your memories.

Send flowers to the Zivoder family.