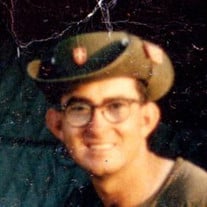 When reflecting on the life of Ron Crislip, words such as hard-working, resilient, and independent come to mind, yet the word that is most fitting to describe him would be selfless. Ron had a generous heart and loved to share his resources with those in need. A genuine man through and through, he leaves behind a wonderful collection of fond memories shared over the years for his many close friends and family to treasure. Not much could be said about the 1940s without some reference to WWII. In fact, June 6th of 1944 was the war’s most notorious day, D-Day, which occurred on the beaches of Normandy, marking the end of the war in Europe. Just weeks later, Ronald Jonathon was born to Clifton Fox and Sally (Sandman) Crislip on June 21, 1944, in Rock Creek, Ohio. His birth brought much joy to the family home. Growing up in the rural countryside, Ron lived a typical childhood of the times. Raised by proud German immigrants, he learned the value of heritage and family at a young age. His father was a local carpenter, cabinet maker, and clock maker. Ron spent much of his early adolescent years fascinated with airplanes later joining the flying club and learned to fly before he learned how to drive. His high school, Grand Valley High School in Orwell developed a football team during his senior year, so he was able to play before graduating with the Class of 1963. He set off for Ohio University in Athens before he chose to enlist in the United States Army during the draft. His formal military training began at Fort Knox and later Fort Benning before being shipped to fight in the Vietnam War. His natural mechanical abilities served him well as a crew chief, maintaining helicopters while serving from the fall of 1965 to December of 1966. He also survived a severe helicopter accident during his year of service. Before he was discharged, he was awarded several decorations including purple hearts and a Silver Star. Returning stateside, Ron was a member of the reserves for a few more years while also taking classes at Kent State. These years were tumultuous and unstable with so many Vietnam war protests. Many of the demonstrations and protests made national news. Little did he know at the time, he would meet the woman who would change the course of his life forever, Janice Newcomb. The two of them started parking in the commuters lot and before they knew it he was carrying her books and having lemonades together after class. She was struck by his sparkling blue eyes and he couldn’t get enough of her genuine smile. With both of their families now living in Garrettsville, they went back for a clambake and Ron whisked her away from the gathering for a short time. Within two months, the happy couple was engaged and joined in marriage the following September 6, 1969. Successful and hardworking, both he and Janice dove into their careers. Ron had successfully finished his accounting degree with Kent State and started working at Ford Motor Company in the greater Detroit area. His hard work paid off when he later moved to the Dana Corporation and the Ross Operating Valve Company. Janice also took an opportunity to work for a new law firm located in Grand Rapids moving the couple there in 1983. Eager to advance, Ron earned his Masters degree from Grand Valley State University. Finally, just two years later, they arrived at their forever home in Jenison. During these years, they began an earnest interest in travel. They owned a thirteen foot Scotty trailer that they used to visit nearly every state park in Michigan and several other trips as well. They traveled as far east as Nova Scotia and many trips out west exploring with their dear friend who was a national park ranger. He and Janice were delighted that they took these trips when they did as Ron’s health would later limit their travels. Ron held a vast array of special interests in his lifetime. He owned his own airplane for a time and enjoyed taking several day trips especially during the fall months to see the beautiful Michigan fall colors. He also enjoyed riding his motorcycle. Ron was a proud member of the Vietnam Helicopter Crew Members Association and was a Mason with the Shriners. He was active in the Gun Club in Dorr as well and enjoyed helping with the sighting in days at the club. All in all, Ron lived his life to the fullest and enjoyed the many simple pleasures in life. He died peacefully weeks after experiencing a stroke. He will be dearly missed by all who knew and loved him. Ronald Jonathan Crislip, age 76, of Jenison, MI passed away peacefully in Grand Rapids, MI on Monday, November 23, 2020. Ron was born in Rock Creek, OH in the summer of 1944 to the late Clifton Fox and Sally [Sandman] Crislip. Along with his parents, he is preceded in death by his brother, Henry. Ron is survived by his wife of 51 years, Janice [Newcomb], his sister, Sally Grace as well as by his nieces and nephews. He proudly served his country in the U.S. Army from 1965 to 1971. Please join the family for visitation Wednesday, December 2, 2020 from 11:00 AM to 1:30 PM at Mallory-DeHaven-Carlson Funeral Home & Cremation Services 8382 Center St, Garrettsville, OH 44231. Ronald will be interred in his family’s plot in Harrington Cemetery in Nelson Township, OH during a graveside service on Wednesday, December 2nd at 2:00 PM. For those who wish, memorial contributions may be made to the Shriners Hospitals for Children 2900 Rocky Point Dr. Tampa, FL 33607 https://www.shrinershospitalsforchildren.org/shc/donate MASKS MUST BE WORN IN THE FUNERAL HOME & SOCIAL DISTANCING GUIDLINES WILL BE FOLLOWED

When reflecting on the life of Ron Crislip, words such as hard-working, resilient, and independent come to mind, yet the word that is most fitting to describe him would be selfless. Ron had a generous heart and loved to share his resources with... View Obituary & Service Information

The family of RONALD J. CRISLIP created this Life Tributes page to make it easy to share your memories.

When reflecting on the life of Ron Crislip, words such as hard-working,...

Send flowers to the CRISLIP family.