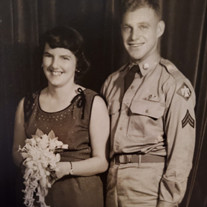 Roy Leonard Sayre, 92, of Nelson Twp., went to be with his Lord and Savior at his home on Tuesday, March 22, 2022. Roy was born in New Holland, Ohio, on November 29, 1929, at 2:00 A.M., to the late Ona and Claria (nee Oldaker) Sayre. As a young man Roy joined the Army and served in the Korean war as a tanker and paratrooper. When he left the Army, he married his best friend and pen pal, Evelyn (nee Mellin) Sayre. He worked at Polson Rubber for 22 years and Chrysler for 17 years prior to his retirement in 1994. Roy was a member of the Nelson United Methodist Church and was a proud member of the local VFW for many years. He was a simple man that loved to farm, fish, hunt, camp, garden and tinker around the garage. After Roy's retirement, he enjoyed taxing the Amish people, with whom he developed many friendships. Roy enjoyed his friends who he worked with, as well as those he met along the way; many will remember the many cook outs and get togethers at the Sayre residence throughout the years. Roy will be deeply missed by his children, Laurie (John) Taylor, Juliann Vermillion, Billie (Dave) Basiden, Donald (Sharon) Sayre, and Doreen (Chuck) Lallathin; grandchildren, Jason Taylor, Heather (Chris) Dover, Melinda (Derrick) Gleason, Mich (Michelle) Luzader, Misty (William) Hubble, Crystal Curry-Bowyer, Stephen Lallathin, and Shawn Basiden; 22 great-grandchildren, 16 great-great- grandchildren, and his special friend, Ruth Randlett, of Garrettsville. He was preceded in death by his parents; wife, Evelyn Sayre; son, Leonard Sayre, son-in-law, William Vermillion, and grandson, Jeffery Lallathin. A visitation to honor Roy will be Monday, March 28, 2022, from 11:00 A.M. - 1:00 P.M. at Mallory-DeHaven-Carlson Funeral Home & Cremation Services, 8382 Center St., Garrettsville, OH 44231. The funeral service will begin at 1:00 P.M. at the funeral home, with Pastor Sandra Greenberg officiating. Roy will then be buried next to his beloved Evelyn at Harrington Cemetery, with military honors. Donations in Roy's name will be graciously accepted by Nelson United Methodist Church, P.O. Box 210, Garrettsville, OH 44231, and/or the American Legion Post #193, 4808 E. High St., P.O. Box 252, Mantua, OH 44255.

The family of ROY L. SAYRE created this Life Tributes page to make it easy to share your memories.

Send flowers to the Sayre family.