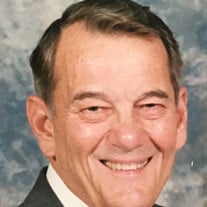 Samuel G. Orr, 94 years old, of Medina, passed away unexpectedly on Thursday, January 13, 2022. He was born and raised in Altoona, Pennsylvania, where he met and married his beloved wife, Rosemarie, who preceded him in death in 2012. Sam joined the Navy right out of high school and served his country during the end of WWII. After being discharged, he worked for the Pennsylvania Railroad before moving with his new bride to Ohio. Here he started his 39-year career at Ford Motor Company, rising in the ranks to become the Superintendent of Pattern Design. He retired in 1991. Sam developed a passion for oil painting in the last few years of his life and would spend hours learning and practicing. He created well over 60 paintings and even entered them in shows and competitions around town. A final tribute to his talent is a showing of 37 pieces at Medina Gem Co. on the square which will be displayed until January 29, 2022. Although Sam loved painting, there is no doubt that what was most important to him was his family. He knew every single birthday and always kept in touch with those far away. He will be deeply missed by his children, Joseph (Sue) Orr of Rootstown, David (Ellen) Orr of Seville, and Christine and Constance Orr of Mansfield. His grandchildren are: Stephanie (James) Readnower, Benjamin (Angela) Stallard, Melissa (Chad) Hummel, Joseph (Renee) Orr, Brian (Augusstda) Orr, Andrea (Adam) Clague, Rebecca (Bo) Sires, Elizabeth (Jonathan) Fry, and Aaron (Emma) Orr. He was PapPap to his great-grandchildren: Victoria, Mara, Piper, Joseph, Jack, Olivia, Declan, Maverick, Gideon, Jaron, Claire, Vivi, William, and Selah. A memorial service will be held for Sam at Western Reserve National Cemetery in the spring where his ashes will be laid to rest next to his wife. He was devastated by her loss and has finally found peace with her in eternity. Care for Sam was entrusted to Carlson Funeral Homes & Cremation Services 3477 Medina Rd. (corner of Rte 18 & River Styx Rd.) Medina, Ohio.

Samuel G. Orr, 94 years old, of Medina, passed away unexpectedly on Thursday, January 13, 2022. He was born and raised in Altoona, Pennsylvania, where he met and married his beloved wife, Rosemarie, who preceded him in death in 2012. Sam joined... View Obituary & Service Information

The family of SAMUEL ORR created this Life Tributes page to make it easy to share your memories.

Send flowers to the Orr family.