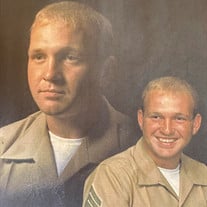 Steven W. Norris, 60, passed away peacefully on Monday, May 4, 2020. He was born January 21, 1960, in Meyersdale, Pennsylvania to Alexander "Ken" and Sara (Smith) Norris. He attended James A Garfield High School where he was part of the graduating class of 1977. After graduating he enlisted in the United States Marine Corps where he graduated bootcamp on August 25, 1977. He was proud to have served his country as a United States Recon Marine, Oorah! Steve's passions in life include taking care of his dog Buddy and spending time with his mother, children, grandchildren, and great grandchild. He loved to cook and have his family over for dinner. His favorite and most delish dish he loved to make was mushroom steak followed by pecan ice cream. Steve will be deeply missed by his loving mother Sara (Smith) Norris; children, Steven (Danielle) Norris, Suzanne Norris, Shannon (Jeff) Norris-Osco and Scott (Majetta) Norris; grandchildren, Kyliee Osco, Kayla Fankhauser, Gavin Osco, Justin Norris and Zoey Norris; great-grandchild, Everly Richter; siblings, Rick Norris, Kenny (Mariann) Norris, Stacy (Mike) Colbert and Lori (Rob) Maur He was preceded in death by his father Ken Norris; dog Tess (Besser) Norris. A Private family visitation will be held Friday, May 8, 2020. A Public Drive Through visitation will be held on Saturday, May 9 from 10:00AM to 11:30 AM at Mallory-DeHaven-Carlson Funeral Home & Cremation Services 8382 Center St., Garrettsville, OH 44231. A Funeral Service for Steve will be held following visitation on Saturday at Noon at Park Cemetery, with Minister Dawn Israel, Military Chaplain, officiating. In lieu of flowers donations in Stevens name would graciously be accepted by the Portage County Animal Protective League https://www.portageapl.org/how-you-can-help/donate-online/ 8122 Infirmary Road, Ravenna, OH 44266. SOCIAL DISTANCING RULES WILL BE FOLLOWED AT THE CEMETERY.

Steven W. Norris, 60, passed away peacefully on Monday, May 4, 2020. He was born January 21, 1960, in Meyersdale, Pennsylvania to Alexander "Ken" and Sara (Smith) Norris. He attended James A Garfield High School where he was part of the graduating... View Obituary & Service Information

The family of STEVEN WILLIAM NORRIS created this Life Tributes page to make it easy to share your memories.

Send flowers to the NORRIS family.