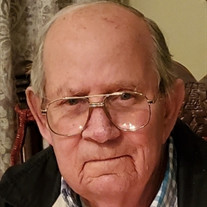 Thomas J. Acord, 82, of Cabot, AR, formerly of Garrettsville, OH, passed away on Monday, December 20, 2021 in Little Rock, AR. He was born January 25, 1939 in Fairfield, IL to the late Charles & Elvira (nee Wilson) Acord. He was proud to have served his country in the United States Army. Tom worked in the Oil Fields, traveling all over the state of Ohio. He later retired from ITT Lester in Bedford Hts. He often worked long hours, often without much sleep and not enough to eat, but he never complained. Once his family was raised and he retired, he was able to afford HIS hobby, building and flying radio controlled airplanes. He was never happier than when he had a controller in his hand and a plane in the air. The greatest love of Tom's life though was his family. He loved spending time with them whether it be fishing, cookouts, going out to eat, watching the Browns, Indians and Buckeyes, or just talking on the phone. He was full of wit, wisdom and humor. His favorite saying was "You can choose to be right or you can choose to be happy, I'm choosing to be happy." We will too, DAD! Tom was a member of Victory Baptist Church,Cabot, AR and a member of the El Paso Country Flyers. Tom will be deeply missed by his children, Michael (Monika) May of Wichita, KS, Veda (Mike) Nelson of Cabot, AR, Verna (Gary) Reigle of Austin, AR, Maria May of Austin, AR, Lisa (Larry) Reddy of Independence, KS, David (Donna) Acord of Derby, KS, a special son, Joe (Michelle) Harmon of Kent, OH; 18 grandchildren, many great grandchildren, several great-great grandchildren, many nieces and nephews, a host of friends, and his beloved dog, Cooper. He was preceded in death by his loving wife, Wilma, with who he was blessed to share 22 years of marriage; daughter, Robin Brake; siblings, Lawrence Acord, Bob Acord, Mary McKibben, Jack Acord, Bill Acord, Fred Acord, Alma Sturgis, and Ann Livingston, and the second love of his life, Evelyn Harmon. The family would like to thank the staff of the Palliative Care/Hospice Unit CAVHS for the compassionate care given to our Dad and Pepaw. The family would also like to thank the members of his VA HBPC team for taking such good care of our Dad over the past few years. A special thanks to his home health aide, Ashley, who Dad loved and adored. We also were very thankful to the staff of Cheryl's Diner in Cabot, AR, for welcoming Dad and treating him like one of your own. Special thanks to Cheryl (the little sister Dad never wanted), Cindy, Connie, April & Candace. A very special thank you goes out to Bro. Ben Leonard of Victory Baptist Church. We truly appreciated your faithfulness to our Dad throughout his hospitalization and death. Graveside services with Military Honors were held December 27, 2021 in Garrettsville, OH. Care for Tom was entrusted to Mallory-DeHaven-Carlson Funeral Home & Cremation Services, 8382 Center St., Garrettsville, OH 44231.

Thomas J. Acord, 82, of Cabot, AR, formerly of Garrettsville, OH, passed away on Monday, December 20, 2021 in Little Rock, AR. He was born January 25, 1939 in Fairfield, IL to the late Charles & Elvira (nee Wilson) Acord. He was proud to have... View Obituary & Service Information

The family of THOMAS J. ACORD created this Life Tributes page to make it easy to share your memories.

Send flowers to the Acord family.