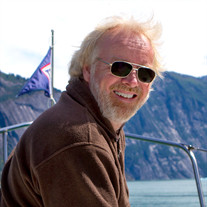 Thomas James Altiere, Jr., age 57, of Windham, Ohio, passed away at home surrounded by loving family, friends, and his faithful knucklehead, his dog, Niko, on Monday, May 23, 2022, following a long and courageous battle with lung cancer. Tom was born September 24, 1964, in Ravenna, Ohio, the son of the late Thomas James Altiere, Sr., and the late Phyllis Jean (nee Claar) (Altiere) Cozadd. Tom was a lifetime resident of the Windham/Garrettsville area and was proud to call it his hometown. He was a quiet, kind, funny, and generous soul who was loved by so many. Tom's life was filled with quiet acts of kindness, for which he never expected anything in return but loyalty. An avid and accomplished hunter and fisherman, Tom frequented his five tree stands and two shooting blinds in the area, where he hunted deer and turkey when he was not on his Baha Cruiser 280, out of Ashtabula on Lake Erie. Tom also traveled to some of the world's wild places, returning with Idaho elk and Alaskan bear, salmon, and halibut, building lifelong memories of boating and fishing the open waters of Alaska with his sister, Tammy and brother-in-law, Andrew. Tom and his friends considered his boat "Magic" a machine for transferring big walleye from Lake Erie into the freezers. Even during his fourth course of chemotherapy, he insisted on getting under the 5:30 A.M. lift bridge and out onto the water. He was often back at the dock at 11:00 A.M., having caught the limit for everyone on board. Tom was generous and his friends and family all enjoyed the culinary bounty of his efforts. Tom was the proud father of two sons: Thomas James Altiere, III, and Joshua Kyle Eric Altiere, and stepdaughter Trista Churchill, who survive him. Tom is also survived by stepfather William "Bill" Cozadd, and by sisters, Tammy Elaine (Altiere) Adams and her husband, Andrew Adams, Cathy Virginia (Altiere) King, and her daughter, Sarah Jean Hall, along with Sarah's daughter and Tom's great-niece, Everleigh Rae Hall, and Cathy's son Zachery and Kelsey Hall. Aunts and Uncles include Butch and Terry Altiere, Richard "Totter" Altiere and Barb Miller, Mary (Altiere) and James Basso, Linda and Dan Wilke, Carla Altiere, Gail Altiere, Clara and Ronnie Shay, Maryann Spencer, and Cousins Bert Spencer Jr., Robin Green, Brian Altiere, Marsha Griswold, Jaquie Gaul, Stacie Tackett, Danny and Doug Wilke, Sandy Krcmar, Stephen Shay, Brandi Lane, and Matt Claar. His family would also like to mention his best friends, Tom Mikulski and Andy Hedge, who faithfully and frequently visited Tom, sharing his life until the very end, as well as Stacy Brown, his friend and mother of his sons. Tom was predeceased by his parents; grandparents on both sides: James & Margaret Claar and Thomas James & Evelyn Altiere; aunts and uncles, Joe Claar, Bert Spencer, Mike Altiere, Donnie Altiere, and cousin, Bill Spencer. Please join the family for a memorial visitation to remember and honor Tom on Sunday, June 5, 2022, from 1:00 P.M. - 4:00 P.M. at Mallory-DeHaven-Carlson Funeral Home & Cremation Services, 8382 Center St., Garrettsville, OH 44231. A Celebration of Life will be planned at a later date; please check in periodically at www.carlsonfuneralhomes.com for updates. Tom will then be inurned privately at the Windham Township Cemetery. In lieu of flowers, Tom wishes that our local hunters and fishermen continue to teach and pass on safe and responsible hunting and fishing practices to the youngsters of Ohio. Remembrance contributions can be made to the Lake Erie Foundation, https://lakeeriefoundation.org/donate/, 236 Walnut Ave., Lakeside, OH 43440, or to The People Tree, 8164 South Park, Garrettsville, OH 44231. The family would also like to thank the entire community for the love, support, and affection shown to Tom and his family.

The family of THOMAS J. ALTIERE, JR. created this Life Tributes page to make it easy to share your memories.

Send flowers to the Altiere family.