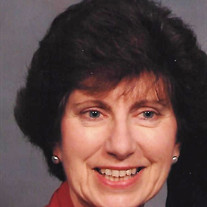 Twyla Virginia (Polen) Hay, 85, a long-time resident of Brunswick, OH, and most recently, The Inn at Coalridge, Wadsworth, OH, passed away June 3, 2020. Twyla was born November 1, 1934 in East Springfield, OH, and raised on the small family dairy farm. She attended the local school, which housed all twelve grades in one building, and was heated by a coal stove. In her retirement, she wrote a collection of stories which depicted her rural upbringing. She graduated from high school and moved to Akron to live with other family members while attending secretarial school. On July 4, 1958, she married Walter Hay, whom she met at a church social. The couple moved to Brunswick in 1963. In addition to being a full-time mother of three children, Twyla assisted her husband as secretary, and notary, of her husband’s law practice. When the children got older, she became a full time secretary for Glidden-Durkee in Strongsville, where she made life-long friends with her “Glid Gals”. Twyla was a member of Brunswick First Christian Church for over fifty years, taught Sunday school, organized Vacation Bible School, served on most committees, and sang in the choir. She was a leader in Christian Women’s Fellowship at the state level. She was one of the early women members of the Brunswick Kiwanis Club, where she held positions of leadership, and attended national and international conventions. She enjoyed working as a Kiwanis liaison to the Brunswick High School Key Club. Twyla also enjoyed gardening, singing, sewing and travel on five continents. She was preceded in death by her loving husband of 59 years, Walter, who passed in 2018; her parents; and her sister. She will be dearly missed by her three children, Marjorie (Randy) Thompson, Robert Hay and Marsha (Evan) O’Malley; her grandchildren, Shannon (Chance) Thompson Teague, Franklin Thompson, Paul Hay and Liam O’Malley; and two great-grandchildren. A private family burial will be held at Ohio Western Reserve National Cemetery, Rittman, OH. Twyla’s care has been entrusted to Carlson Funeral Homes & Cremation Services, 3477 Medina Road, Medina, OH 44256. In lieu of flowers, contributions may be made to Hospice of the Western Reserve, www.hospicewr.org.

Twyla Virginia (Polen) Hay, 85, a long-time resident of Brunswick, OH, and most recently, The Inn at Coalridge, Wadsworth, OH, passed away June 3, 2020. Twyla was born November 1, 1934 in East Springfield, OH, and raised on the small family... View Obituary & Service Information

The family of TWYLA VIRGINIA HAY created this Life Tributes page to make it easy to share your memories.

Send flowers to the HAY family.