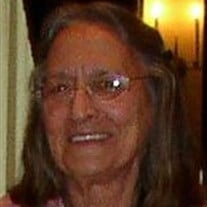 Virginia Lee Wilson, died on July 3, 2020 at her Valley City Ohio home. She was just a few weeks short of her 90th birthday, which was August 14, 1930. Virginia was the daughter of Amon & Merle Cowger of Frametown, WV, and is survived by her son, Joel Jr. and her sister, Agnes Marks, of Seville, Ohio. Virginia Lee will be remembered by friends and family as intelligent and witty, always funny and irreverent, and for her business acumen. Virginia got married to Joel Wilson while she was still a junior in high school, and never returned to high school to get her diploma. Despite her lack of formal education, she was a talented business woman who became a self-made millionaire. One of the first collectors of the pastel colored Depression Glass, beginning in the early 1960s, Virginia began dealing in the antique glassware, traveling to and setting up at flea markets and glass and pottery shows, and counted a number of glass book authors among her friends. As the collecting craze caught fire in the 70s, she would go on shopping expeditions with her best friend Dorothy Kerber. Dorothy collected the brightly colored Fiesta pottery, and taught Virginia about it. By the time the first “Collectors Encyclopedia of Fiesta” was published and Fiesta became the most widely collected pottery in the country, Virginia and her son Joel had become the largest dealers of antique Fiestaware, supplying and shipping to antique stores and collectors all over the country. They even sold items to Andy Warhol, the most famous of Fiesta collectors. They contributed chapters to later editions of the “Collector’s Encyclopedia of Fiesta” by Bob & Sharon Huxford, which itself was the largest selling book on collectible pottery in the world, having sold over 100,000 copies, and Bob & Sharon turned over the book copyrights to Virginia’s son Joel, hoping he would continue the book in future editions. In 1985 Virginia along with her son, approached the Homer Laughlin China Company about making some sort of commemorative item for the 50th anniversary of Fiesta’s 1936 introduction, as the line had been long discontinued. After being offered a large up-front deposit, Homer Laughlin China decided not only to make an exclusive Fiesta collectible for Virginia's company, China Specialties Inc, but to reintroduce the full Fiesta dinnerware line to the general public. For a number of years, China Specialties was the only source for the new Fiesta line in the Cleveland area and taking advantage of their mailing list that included most serious Fiesta collectors in the country, they published a national newsletter “The Fiesta Collector’s Quarterly” and had thousands of readers. The reintroduced Fiesta line became a huge success for Homer Laughlin China and 34 years later remains the top selling dinnerware line in the nation's department stores. Having learned the lesson that unless you own the rights to a line, you can expend a lot of cost and effort into making a line a success, only to get displaced by much larger customers, Virginia and her son decided to approach the Hall China Company, about making some new shapes in old patterns that Hall China had once made. Hall gladly turned over all rights to a number of long discontinued patterns they had developed in 1930s and 40s for regional grocery chains, and China Specialties went on to purchase millions of dollars of china from them. When Longaberger Baskets in the mid 90s began placing massive china orders with Hall, the competition for production space began to slow the flow of ware to China Specialties. Virginia Lee, using just her first and middle names, revived the long closed Columbia China Co. and it is with this last decision she will be forever remembered, because the back stamp on all those items say “China Specialties Limited Edition, Designed and Approved by Virginia Lee”. There are literally tens of thousands of her pieces sitting in collections all over the world. People decades from now will turn over a piece of china in a collection and see that back stamp and wonder just who this ”Virginia Lee” was. Virginia Lee was a wife and mother, married almost 70 years to her husband Joel, and they had one son, Joel Jr, and one granddaughter, Kinsey. Virginia was also a very attractive woman, that had always been a big part of her identity, and she kept herself current, cutting and styling her own hair, proud of her year round tan, her "24 inch waist" and her lithe build. Only when dementia stole her vanity did she start to look her age. Arrangements were private and entrusted to Carlson Funeral Homes & Cremation Services, 1642 Pearl Avenue, Brunswick.

Virginia Lee Wilson, died on July 3, 2020 at her Valley City Ohio home. She was just a few weeks short of her 90th birthday, which was August 14, 1930. Virginia was the daughter of Amon & Merle Cowger of Frametown, WV, and is survived by her... View Obituary & Service Information

The family of VIRGINIA WILSON created this Life Tributes page to make it easy to share your memories.

Send flowers to the WILSON family.